Hi all. Well, it’s middle of summer here in London and we are experiencing a raging average temperature of about fifteen degrees (so please, no more emails about “how cold” it is in Sydney. Pish!) and yet summer festival season is in full swing. It’s like everyone is in town to get silly, including the usual culprits Operator Please (still working super hard-they play almost every night in a different town). Midnight Juggernauts at LOVEBOX festival next weekend with Howling Bells, who have returned to their second hope with a new bag of tunes! And of course Sparkadia who have the best booking agent in town (I was told it was the same one as “a small band called Nirvana”) as they are playing every major UK festival possible, including Oxygen and T in the Park this week in Scotland. So this blog is mainly going to focus on two newcomers to the scene, and it’s a rampant one at that. 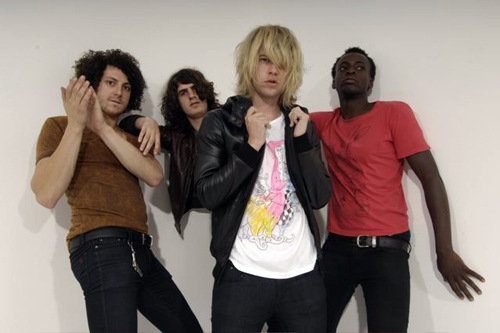 First up, The Galvatrons…*cue a sigh from those sceptics out there* I know, I know, I’m the last one you have to convince that the irony of such a band, who fuse AC/DC thrust with DEVO-esque cheese. But crikey, they played to a crowd who were won over with their 80’s gyration synth and 70’s guitar. The there is that half time slow down (re: ‘When We Were Kids’) as vocalist Johnny chucks his wispy white mullet around and sticks his index finger to the sky. It should have been kitsch, but somehow it wasn’t, and everybody dug it! Even me… They really give it everything, and it’s tuneful despite also being gimmicky and if there is one thing that helps a band along in the UK, to sell records, pack out shows and get people remembering them is having that point of difference, a trademark, and GALVATRONS are onto it… Also, don’t forget the all important premise of the arts, whether it be music, dance or theatre, and that it should always aspire to entertain, and The Galvatrons are first class when it comes to this. They’ve signed some sort of deal with AM+AK (another music + another kitchen), which is an uber-forward thinking team of music biz boys who hold a weekly night at Proud Galleries. AM+AK are in the know of what’s happening on the scene, so can’t wait to see what can happen with their latest Aussie recruit. 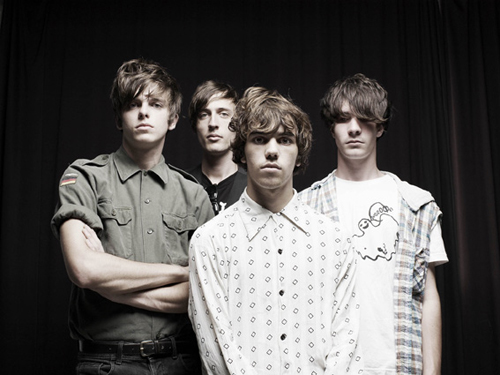 The second newcomer to town is Ghostwood, a band whose tunes I’ve always been really fond of, a rock band with their fingers in a Jesus & Mary Chain socket connected to a Primal Scream’s melody maker. I went to almost every one of their gigs in the couple of months leading up to when I moved to London, over a year ago now, and so seeing them play again it was awesome to see how much they have changed and progressed. They played a short stint on a Tuesday night at Artrocker’s night that hosts many an up and coming band, donning super sized shirts that nod at Manchester circa 1989, Ghostwood’s tight distorted pop was well received, with the instrumental jam-out at the end a relatively new addition to their sound, but fitting and not unlike the acid-dance of Stone Roses. Many people are of the mind that ‘rock’ is quite out of fashion at the moment, with electro/sampled pop music a.k.a Ting Tings..ect dominating the music market and the minds of critics. But I’m of the mind that if you’re good, and get the right people behind you, it doesn’t matter what tune you play too. And I think the U.K are ready for the next big Aussie rock force post-Vines. Though they’ve had their dance off with the likes of The Presets, Cut Copy and Pendulum… it could well be the right time for Ghostwood.