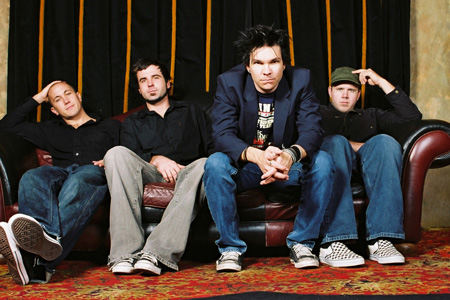 The Butterfly Effect (named long before the Ashton Kutcher film) are one of those bands that seem to divide people – either they love them, or they hate them. They first came to the attention of the Australian public courtesy of Triple J radio presenter Costa Zouliou who fell in love with their song ‘The Cell’ off their debut EP. At the time, the band were still independent – and I ended up seeing them in 2001 at a small pub in Sydney called Bar Broadway supporting Cog and now both bands have become two of Australia’s biggest alternative-rock acts. The band had an incredible knack of creating the right blend of melody and heavy riffage, and the soaring, operatic vocals of Clint Boge topped it all off. It wasn’t long before these guys took off.

Which takes me back to my original point – people love or hate them. I think it may come down to Clint the vocalist – some people love his voice, and others can’t stand it. Also, he exudes a fair amount of confident on and off the stage and a lot of people take that as arrogance. Earlier this year he went on a drunken tyrade on the band’s official message board (funnily enough the band no longer have a message board on their site), so that didn’t help Clint’s image. But I interviewed him earlier this year and found him to be a really nice guy, so the question remains unanswered.

The band released the rock-fueled Begins Here LP a couple of years ago (their debut long player) which cemented their place at the top of the Aussie rock contingent. They then took a step sideways and released the far-more melodic Imago a couple of months ago, which they recorded in the States with producer Joe Barresi (Tool, Tomahawk, Queens of the Stone Age). The sound on the album is nothing short of huge, and contains some fantastic songs. It’s taken me a while to get into the album because even though I love melodic music, Imago is a big change from Begins Here, but still excellent nonetheless.