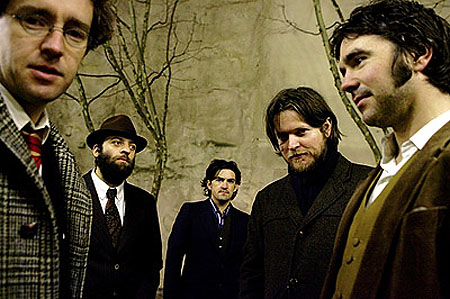 Sometimes a song would get played hundreds of times on the radio and I wouldn’t pay much attention to it until all of a sudden it would hit me just how good a tune is. And that’s how it is with this Augie March ballad, which has a Jeff Buckley feel of emotional reprieve attached to it, though upon closer listen it’s all about scoring with a girl the singer has known since school:

“Should you expect to see something that you hadn’t seen,

In somebody you’d known since you were sixteen.

If love is a bolt from the blue, then what is that bolt but a glorified screw? “

Augie March formed in Melbourne in ’96 and has so far released three albums, all through Sony/BMG. They’re one of those bands that work the United States a lot so chances are most people into this kind of music would’ve heard of them. Their latest album Moo, You Bloody Choir got rave reviews in Australia though I believe it’s still unreleased overseas? I could be wrong. The album was nominated for the J award, a yearly prize given by music station Triple J. I get the impression that they ride that success-overseas-now-back-for-local-shows wave here, but it’s alright for this band because they actually had a core fanbase since early on in their career. I’ve missed both their tours here this year so if anyone has seen them live let me know what they’re like.