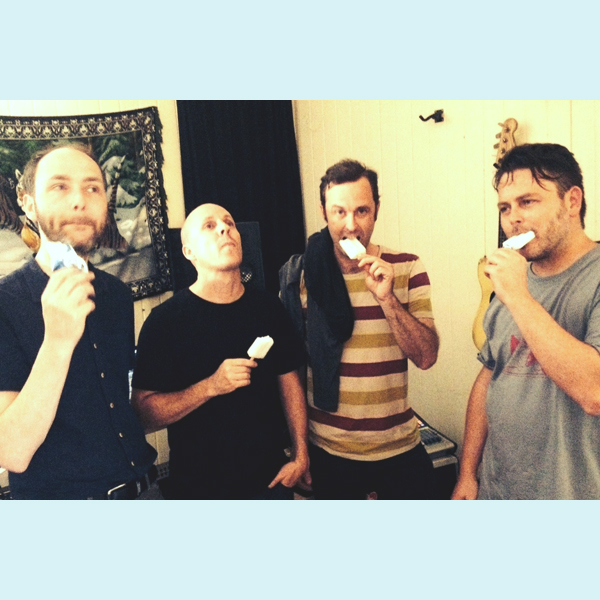 It’s been 10 years now since Dollar Bar released their self-titled debut LP. In 2013 the band emerged from a six-year hiatus with the excellent follow up, Paddington Workers Club, named after ‘a shitty old bar room’, long shut down, that was a focal point of Brisbane’s Spring Hill scene.

The album could have been recorded back in the 90s, when Dollar Bar first formed, its sound falling somewhere between early Pavement and GBV. The band hasn’t lost its sense of humour, but these days the tracks (e.g. ‘Hipster Mental Ward’, ‘City Pricks Sitting Pretty’) take aim at the kids inhabiting the stages and the dives that Dollar Bar long left behind.

Dollar Bar sent us a track-by-track account of Paddington Workers Club. Check it out below:

I’d formed a new band with my brother David, along with John and Cuffy from Dick Nasty. We did this song based on White Town’s ‘Your Woman’. Dollar Bar liked it and gave it a burl. After several attempts at re-recording and overdubs, we agreed that our original take, including guide vocals, was strongest. Basically it’s the poor man’s Strokes. (Dale)

This song was inspired by my time working in administration at a mental hospital in Toronto. Opposite the hospital was an arty stretch of Queen Street West – one of the hippest spots in town. I wrote the lyrics on my walks through the lush park grounds to purchase caffeine hits, and there were literally always tattooed girls riding bikes outside. The part about the guy putting his $20 bill in the microwave to sterilise it is a true story too. (Patrick)

The lyrics for this are all lifted from obvious places – like the first verse, which is basically just a Flavor Flav rant turned into a song with a Mental As Anything bit tacked on the end. This song started life as a quick recording by The Young Liberals, which is a band I’m in with Ben Salter. Ben added some important elements, such as the sublimely un-party ‘Hoorahs’ in the bridge. (Chris)

We played this during soundcheck at Brisbane venue The Zoo, which turned out to be our ‘last’ show. We were supporting Decoder Ring, who were touring their Somersault soundtrack album. Anyways, I wanted to write a Custard-style riffy tune. It references jailbreaks, Eyes Wide Shut and overdue bills. I also successfully rhymed ‘orange’. (Dale)

I stuck two song ideas together for this one: a ‘Brand New Love’ style guitar line that I thought would sound great played loud and reverb-y by Dale, and a chorus progression ripped from a New Order song. I really liked the ‘us versus them’ or ‘grass is always greener’ idea of singing ‘city pricks sitting pretty’ in an terse fashion. I also like how it sounds like an epic lengthy song, but it’s actually less than two and a half minutes long. (Patrick)

I was staying in an artist-run warehouse in Sydney that had an amazing library, including a nature book about animals and how they defend themselves. I made a demo at the warehouse and when it came time to use it as a Dollar Bar song I really wanted to see how it would sound with Dale singing it – and it just seemed to make more sense. (Chris)

It seems like everyone is having their best crack at referencing and replicating The Go-Betweens’ catalogue lately, so I thought we should have a go too. This recording at Donnie’s [Donovan Miller, Nowhere Audio] was only the fourth or fifth time we’d ever played it as a band – if you listen closely you can hear me calling out the changes in the background. The lyrics are from the point of view of repeatedly answering the question ‘why?’ from my son. He’s not old enough to ask just yet, but I know it’s coming. (Patrick)

‘My Fleas Have Dog’

After a long hiatus, I attempted to write another Guided By Voices flavoured piece, from around the Bee Thousand period. The lyrics don’t make much sense and some of the words are used incorrectly on purpose – it’s fun to sing and play though. (Dale)

This song has been around for ages. I originally did it with a band I had in Melbourne called Halfheads, but it was first recorded a few years ago for an album by The Young Liberals. Ben Salter backs me up on vocals, as he did on The Young Liberals’ recording. I like how the song is very obvious and has no surprises, and I love how it has survived a few different bands. (Chris)

I wrote this song very quickly on a train on the way to an impromptu album recording hosted by Ben Salter. It was his birthday so it was kind of a present. It has very generic feel about it, something I’m not that good at giving a song usually. Seemed to work out OK this time. (Dale)

Dollar Bar are touring the east coast in April. Here are the dates: