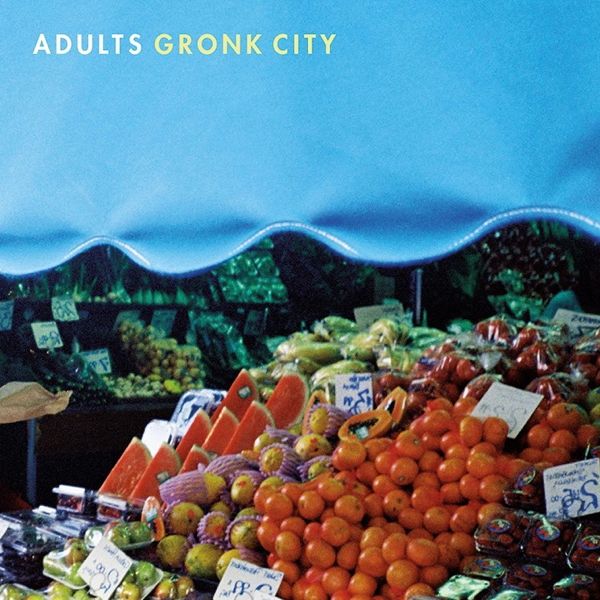 Sydney trio Adults was formed in mid-2012 by former members of Step Panther and Joystick, and debuted last April with the coarse blues of lead track ‘Ominous’. A year later they have followed up with their first EP, Gronk City, which is out now on Bechamel Records – a Popfrenzy offshoot specialising in 7” releases and run by Adults’ own Greg Clennar.

The band’s sound sits somewhere between post punk and C86 jangle, the twee vocals underwritten by scouring guitar and a rhythm section that’s forever to the point. Thematically, Adults embrace a punk notion of the intellectual degenerate. On the lurching peripatetic fantasy ‘Freight Ship’, for example, the protagonist, stowed away with criminals and lunatics, has a taste for the high brow: ‘got me a copy of Rimbaud/got me a copy of Miller’.

In their mix of aesthetic threat and thoughtfulness Adults resemble the gentle punk of Television Personalities. Closer to home, their music has an affinity with the Stevens’ concise interpretations of the Dunedin sound – a relationship that’s particularly clear on Gronk City highlight ‘Rain’.

There’s some genre hopping on the EP, which skips from the twee pop of the opening track to aggressive closer ‘Snail Woman/Women’ with its Sonic Youth-inspired interludes. Adults’ work, however, is extremely satisfying in its bare bones construction, tunefulness and wit.

Stream Gronk City in full after the jump, along with the video for first single ‘Ominous’.

Adults will launch the Gronk City EP in Melbourne and Sydney next month. Dates below:

Sat, 3 May – Boney, Melbourne with the Stevens, White Walls and Possible Humans

Sun, 4 May – Minimum Wage at Bar 291, Melbourne with Gazar Strips and Tangrams