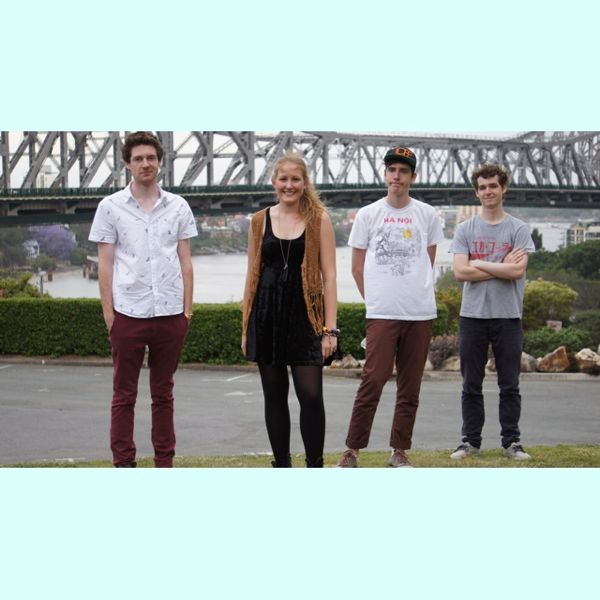 Brisbane-based quartet Santelmo began putting music out mid last year, culminating in the release of their debut EP Pins & Needles. The band cites some pretty divergent influences, from Grizzly Bear to J Dilla. The former at least is evident over the course of their 6-track EP, with honeyed, Ed Droste-like vocals layered into pretty but distorted melodies.

A Pins & Needles standout, ‘Holiday Season’, begins with an unassuming drumbeat that could belong to any cookie-cutter indie rock song. Cue droning, dissonant vocals that would threaten to float away if they weren’t rooted to a persistent, driving bass line and rhythmic guitar. If the song wasn’t full of sneaky counter-melodies and harmonic textures it would be lifeless, a risk avoided by Santelmo through careful production. A nod to J Dilla, maybe? They just don’t seem like the kind of guys (and gal) who’d put out a careless, sloppy track. You probably had a better holiday than Santelmo, but at least they had the decency to turn their shit time into a gritty, melancholic and captivating tune.

The moody vocals, agile bass and folky riffs on Pins & Needles combine to prove that 1) Santelmo are capable of crafting angsty gems without any clichéd sappiness and 2) indie rock doesn’t have to be hopelessly unoriginal and bereft of emotion.

Santelmo have just put out a film clip for the EP’s title track, ‘Pins & Needles’, with help from Brissie filmmaker Tom van Kalken. Watch on to see guitarist Eamon Webb inadvertently turn one of those totem tennis poles that lonely kids get for Christmas into a pogo stick.

Eamon and bass player Joe Saxby have also been putting out some neat folktronica under the grammatically-challenged moniker These Guy that you can listen to here.