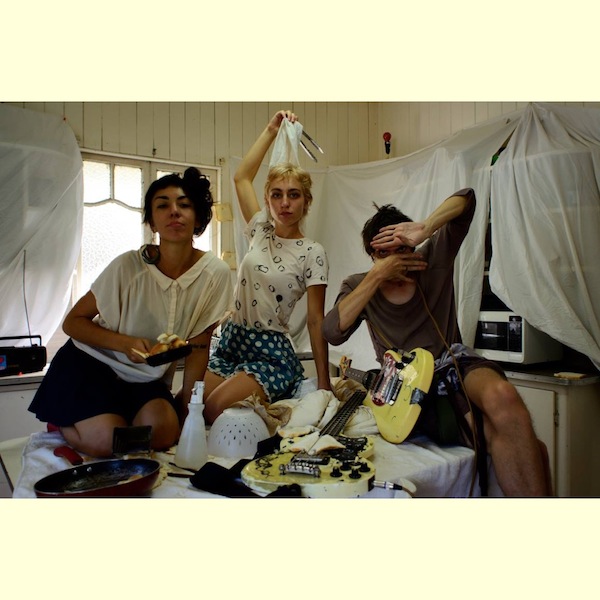 The premise of this video from Brisbane three-piece BENT is pretty simple: wake up, mess around with breakfast stuff, writhe around on the kitchen benches, look deranged in an attractive way. A couple of ideas and a whole lot of fuck-it confidence that they’ll work out. The song itself, from their Bent EP, released in early January on Moontown Records, is like walking around in circles and bumping into things – metal things mostly. It’s also very well recorded: all the pieces stand out and apart and grab your attention equally.

The vocals are bratty and dramatic. I wanna say maybe too dramatic, but that’s just cause I listen to too much auscore shit and now whenever I hear vocals that are at all dynamic from someone who can actually sing it freaks me out. Singer Heidi Cutlack kinda freaks me out on this track anyway, especially when she yelps that childish kinda-funny, kinda-sinister line ‘Where is your milky???’ over and over.

Cutlack made this video. She also does the art and makes the merch – and I reckon that even if BENT hit it big (or as big a band that sounds as weird as this could), she still will. This is a real DIY band, and that means more than just playing a few house shows from time to time. They’re totally involved in every part of their look and sound (they definitely know exactly the kind of no wave-ish stuff they’re aping better than me, so I’m not gonna embarrass myself by guessing) and they make you want to get involved as well.

Watch this cool weird video and then listen to the record. They’ve been playing on heaps of sick lineups in and out of Brisbane lately – I’ve never seen them but I did hear they’re the reason bands aren’t allowed at Heya Bar in the Valley any more – so catch them live if you can.