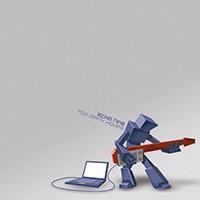 So there’s this guy called Echo9 and apparently he recently wrote and recorded an entire album in nine days (it was meant to be done in seven days but he went overtime). He’s released the fruits of that project for free, the link to which is at the bottom of this post, and it’s an impressive result regardless of the time frame in which it was produced. I enjoy his music. I enjoy the concept. I enjoy his socialist approach to distributing that concept.

The hardest part of this post was picking which of the seven tracks on the album to post (one track for every day of the intended seven day day recording period). The whole album is instrumental and consists largely of major-key electronica arrangements atop some IDM-inspired programming. ‘Stutter Freeze’ opens with several minutes of dark synths clashing with standard arpeggios over a straightforward beat, which works to paint a fairly beige musical canvas before throwing fistfuls of colours at it when, halfway through, the fast, micro-produced rhythms kick in. ‘Rekindling’ closes the album with one of the more straightforward but driving beats on the album. The subdued, layered synths map out an icy sonic landscape before building to an uplifting M83-like neo-shoegaze climax, trading on huge dynamic shifts and sheets of distorted guitar.

This is exciting music and the circumstances of its creation only make it more vital. Whilst it’s clear that a lot of that nine days went to beat programming (often signalled by the repetitive synth lines), it still combines to form a cohesive and impressive whole. Kudos, Echo9.

The album can be downloaded for free at: www.mediafire.com/?w4bmppu231g