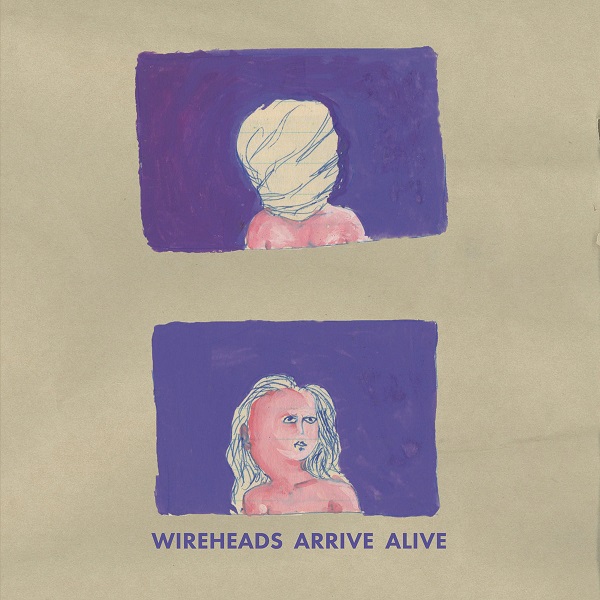 The Australia on Adelaide band Wireheads‘  new record isn’t the ‘smoking cigs in your sharehouse and goin down the shops to buy more cigs and cheezels’ kind of Australia. It’s violent and murky and sinister. Sometimes it’s fun too but in a way that might go off the rails any fucking second. Album opener and title track, ‘Arrive Alive’, throws up the image ‘getting shot dead in the head/ for tryna buy orange juice/ you got two dollars in your hand’, and album highlight ‘Dedication’ the merciless bashing of beautiful faces.

But this record also might be about a hunt for something redemptive and beautiful, a bit of subtlety in circumstances that are more suited to blunt, unforgiving ugliness. Cause there’s those female vocals in the background of ‘Dedication’ too, working as a foil to the violence with a bit of uneasy romance; ‘your face is so goddamn beautiful/ your face makes me feel unusual’. And then ‘Organ Failure’s desperate squealing sax offset by interludes of sweetly drawled ‘darlin’s’ and a super pretty bass melody.

You’ll never get the energy of a Wireheads live show on record (take a look at the 20-odd people listed as contributing to the record on Bandcamp though and you’ll see they gave it a good go), but what you do get is time and space to let the emotional core of a lot of these songs to sink in. You get things like ‘Ice Kool Flavour Aid’, a straight husky cowboy ballad that’s earnest in a way that not a heap of other Australian bands would have the guts to do.

Arrive Alive is full of familiar characters and archetypes: prisoners ex-soldiers, emperors and goddesses and the dying. They’re all wondering what it means to survive, and if that’s really the most important thing. The fantastical elements could be allegories to real shit: ‘Proserpina’ is the Goddess of the cycle of life and death – or a woman offering redemption. Emperor Nero is another dictator fucking around while everything burns to the ground. Or maybe they they’re just funny stories to write songs about – ‘Nero’ is especially wacky, with that woodwind that makes everything feel like it’s coming down around your head.

The first couple of times I listened to this record I thought it was a bit long and maybe trying a little hard to be weird – but I reckon that was just because there’s so much packed in here it’s easy to get overloaded. Now I’ve got it a bit more I couldn’t think of anything I’d cut. Maybe ‘Isabella Says’ – I don’t care that much about ‘cosmic gamma rays baby’ – but then there’s the funny little flute freak out that leads you into the beautiful ‘So Softly Spoken’, making the honest simplicity of that song able to catch you off guard and be something properly lovely.

Arrive Alive is a smart, packed, generous record with ideas popping out the seams. Because of this it’s easy to overlook the humanness of a lot of the songs, the honesty and the heart – I nearly did, and now I’m tellin’ ya not to make the same mistake.