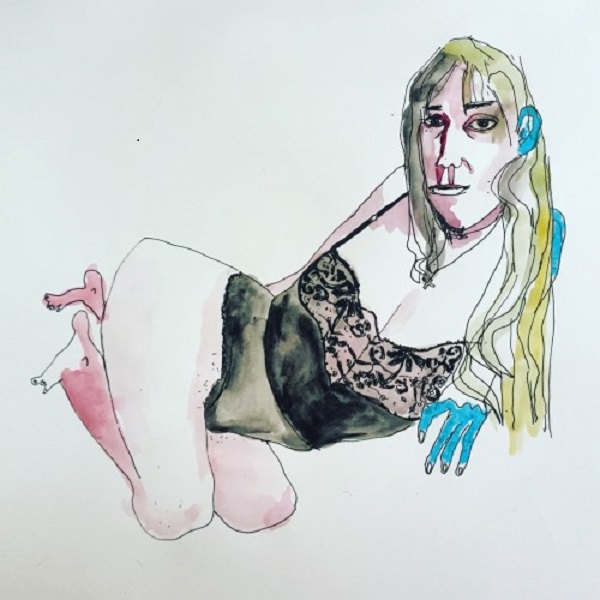 I’ve never really been able to listen to sad music when I’m sad. I’ve never had the emotional capacity ‘have a good cry’, wallow in it, let it out and move forward. I’ve kind of always found sadness unbearable and unacceptable. I can’t deal. So I turn it into hate or anger at myself or those who’ve done me wrong. Now I’m not gonna say Sarah Mary Chadwick taught me how to feel sad, cause that’s some trite bullshit. I am gonna say that the themes on her new record Roses Always Die reveal something is so important, but almost impossible to accept: that there’s no shame in feeling bad.

These spare and beautiful songs pick at the stiches of every bad feeling: fear, grief, desperation, loneliness, hopelessness, and examine them with heartbreaking clarity.

Accessing these emotions, for Chadwick, has become routine. I can’t really kid myself that the catharsis I feel from these songs is something I’m sharing with the woman who wrote them, but you know, art’s in interpretation.

‘It’s something that I’ve just got into the habit of doing,’ she says. ‘I think when I used to play in the band [Batrider] and it was more physical and aggressive, that was probably more of a cathartic experience. I think as I get older it’s got both more of a purpose and less of a purpose. I do it more, it’s a bigger part of my life, but it’s become more mundane.’

Routine and boredom seem to be big parts of Chadwick’s creative progression. The guitar that still lingered around in a few songs on last year’s 9 Classic Tracks is gone here, leaving vocals and the organ that Chadwick bought from her housemate for $50 as the only instruments (the drums are the beats built into the organ). Chadwick said that keyboards are just more interesting to her at the moment: ‘it helps that I’m not that good at it. I got to a point when I’d been playing guitar for so many years that was like I just don’t think I can do anything that I’ll enjoy doing with guitar anymore. Maybe with keyboards the same thing will happen.’

There’s something big about these songs. For one thing, organ just sounds important, even if it’s backed up by thin programmed drums and sparse production. But the grandness is also in the way Chadwick builds drama with these few elements. She says that the idea of drama was really the only preconceived notion she had making the record.

‘I wanted to have some big songs. Some of them I reckon ended up sounding like a real Liza Minnelli show tunes vibe. I was telling Geoff [Geoffrey O’Connor, who recorded the album] a couple of times, “Oh yeah, that’s a Liza one”. ‘The Fire That Torched My Fear’ is one – I imagine that as being a big moment in like a musical or something – not in a way that anyone but us would really get.’

I get it. Yeah, probably only because she told me, but now I can’t listen to that track without seeing a ‘Life is a Cabaret’-esque black stage and spotlight, tears streaming down a stark white face.  ‘The Fire That Torched My Fear’ follows ‘Yunno What’, my favourite song on the record for its groovy-ness (the dance track) as much as it’s visceral desperation. Each song easily wounds you on its own, but back-to-back they’re out to destroy you.

Not necessarily just with the bitterness of lines like ‘The Fire That Torched My Fear’s opener ‘why did I expect more from today? I should have let it just be nothing’ but also with that ever-present tenuous hope of the redemption that friends might offer, if you can muster up the courage to ask (‘maybe I’ll see someone who cracks me up all night / someone who’ll make it feel alright’).

‘Four Walls’ is the shortest song on the record but the most intense and claustrophobic. You can hear Chadwick’s fingers moving over and hovering on the keys, while she sings, I’m guessing, about the responsibility of living for someone who’s gone, trying to be witness to their life: ‘some things speak through me / and I can feel your pain wild and free’. This intimacy may have been helped by the way the organ was recorded. Because it was too big to be moved, Chadwick had to record everything in her apartment. Which, she says, made things easier.

‘We live in a big warehouse style apartment thing, and I think that really worked for the recording – if we lived in a tiny dead apartment thing it wouldn’t have. I think we did the tracking over a day or two, tops. And then all the vocals I recorded in his studio.’

She continues, ‘I actually wrote 9 Classic Tracks on the same organ, but when I recorded with Geoff the first time, to be honest I think he didn’t trust me. He was like, ‘Um let’s just record it on this synth…’ And because I hadn’t done anything like that before I didn’t mind at all, and I think that sound really worked for that record. But this time I wanted to use the organ I wrote it on, just to make sure it sounded different from the last [record].’

It’s easy to assume that every sad song is about sex and relationships – especially when you’re young and privileged and nothing else particularly bad has gone wrong in your life (hello!) – but there’s a lot of different kind of pain in here. Chadwick’s father and close friend died very close together in the last year, and she says obviously that influenced the record a lot, as did starting psychoanalysis. She says she’s become more interested in her own motivation – ‘there’s a lot in there: what makes things happen and what’s propelling things, why things happen’ she says.

The frankness of her own self-examination is instantly appealing. ‘I’ve never been worried about admitting the bad things about myself, or someone else,’ she laughs. But she says it might also be slightly defensive. ‘Maybe that’s a bit of inoculating yourself against bad things, or being surprised. Because if things go to shit you can be like – well, I knew that was gonna happen’.

While the record might not be overtly about physical and romantic connections, they’re still in there, still affecting everything else – you can’t put your traumas in a line and deal with them one by one. There’s no song that’s just about death or just about sex or just about hope; Chadwick’s stories are way too complex and whole for that. ‘Turn On’ deftly mixes intimate imagery and beauty with grief in lines like ‘I believed your skin would cauterise me’ or the picture of ‘a stupidly idyllic cemetery’. The vocals here are fuller than the rest of the record, dark whispers fill up the background while Chadwick’s voice strains under the weight of her loss, front and centre.

‘I think porn’s really interesting’ she says ‘it’s people’s base instincts and there’s all these power dynamics and it’s a little bit seedy and a little bit hot and a little bit lame and problematic and there’s so much stuff going on in there, it’s never boring’. Like in Chadwick’s music, nothing is ever just one thing in these visual works.

It’s also shown her something about the perceived value of art. ‘There’s something kind of weird about it,’ she says. ‘If I did a song or whatever, you can buy that for a dollar on Bandcamp. But all the feelings in the world went into writing it, then me and Geoff did the tracking, then the vocals, then he mixed it and it got mastered and someone from Rice is Nice promoted it. Whereas I can sit down and watch some porn while I’m watching Bridgette Jones’ Diary in the background and draw a picture and I can sell it for like $100! It just cracks me up, how much effort goes into one or the lack of effort that goes into the other.’

There’s kind of pure joy in these drawings that comes from self-destruction and abasement – when you’re heading towards someone with open arms, asking them to fuck you up/ just fuck you. You can  hear it on the record too, most notably in single ‘Cool It’ – which comes around with some arse-moving drums and some deep and slinky base notes.

It’s hazy and kind of dangerous; ‘you’re not my good time… Unless you wanna be / I could do with a little pick-me-up/ and looking into your eyes/I wanna test out some limits’ she sings, before the song ends to slide into ‘The Man in the Flags’, where she becomes the wise friend consoling someone else. ‘I can see you’re reeling / from that last punch you’re still bleeding / she is nothing more than dead wax / and when her hold over your heart slacks,’ she sings over a jittery high hat and snare sound and a keyboard solo straight out of a sea-shanty – a false kind of joviality that sounds like putting on a happy face for the sake of a friend.

Chadwick leaves the end of the record for the more quiet and delicate moments. Like in late highlight ‘Make a Boundary’, with it’s startlingly beautiful melody in a chorus carried by vocals that catch at all the right moments. That song and the strained, empty-sounding ‘Right Now I’m Running’ make up her last exhausted shout – ‘blackened by the fire’ – wanting to be able to end things and walk away with something left, but ending up giving it all away anyway.

But she still can’t resist finishing with one eye on the hope of other people: ‘hey your eyes light up / and hey your mouth seems smart / and hey look the sun’s up’.

Different parts of the cycle of hope, loss, disappointment and trying again that makes up pretty much everyone’s whole life, are scattered over this record. There is progress, but it starts and stops, moves backwards, sometimes gives up. The absolute honesty and self-knowledge with which Sarah Mary Chadwick approaches this cycle makes her an artist to be in awe of. Roses Always Die is an album that makes you wanna be brave, to make any shame in sadness cower under that beautiful, real-shit, truth.

Roses Always Die is out on Rice is Nice Friday August 5.

And, if you really wanna hear some guitar, Chadwick is releasing a seven inch on a Swedish label later in the year with two guitar tracks that were cut from the record.

Sarah Mary Chadwick is touring around Australia, and will be in:

Melbourne at the Northcote Social Club on September 1

Brisbane at Trainspotters on September 17