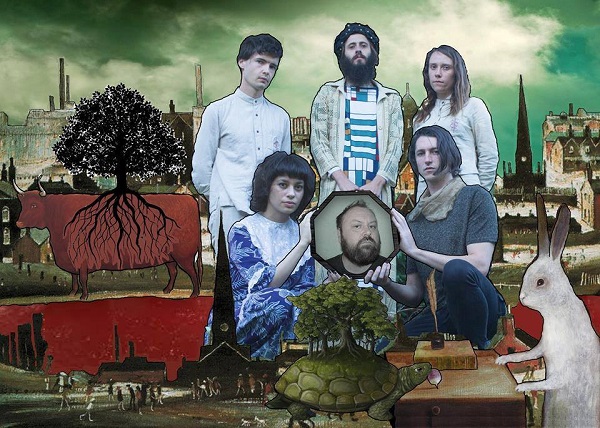 If I told you that you could get a special edition of Girls Pissing on Girls Pissing‘s latest record with a wooden box of tarot cards, would you think that was lame or cool? Or be completely unsurprised, considering the name? What if I told you this record heavily featured flutes, some of the least sexy sexual lyrics AND the most terrifying vocal performances in recent memory? Well good news, it doesn’t matter! Genre is nothing, all your ideas about what makes something good or bad or cool or lame are arbitrary – and this album will blow your brain out if you let it.

There’s a lot here – 18 songs, a double album by anyone’s standards. It takes patience to get into – I’ve been trying to write about it for weeks but for a while I was getting confused and turned around more and more every time I listened to it. It’s slow and fast, messy and clean, unfolding with marching ominous repetition, tap tapping on the inside of your skull, building pressure over 6 minutes tracks as well as over the whole 90 minute-ish thing. Horns and strings see-saw wildly over and through these songs. Some feel like baroque and serious almost-folk-metal, some almost straight hardcore, when the crunch of distorted guitar gives a conventional rock dog like me something to hold on to.

There’s also a strident kind of post-punk at its heart. Something like ‘Pacific Hygiene’ could be a Mere Women song, half drowned in oil and set on fire. ‘Out of Zone’ is formidably good, low rumbling guitars jostling around a desperately spiteful rasping shout that could break bones; ‘LVX’ is brutally cynical, teasing and hectoring vocals that explode into screeching hysteria, while ‘Lustration’ shows the hopelessness lurking underneath the surface of all rage – droning slow and dangerous. There’s a real ‘last chance to save your soul’ feeling to all the performances on this record. Despite its length, it stays brutal all the way through

It’s not that the lyrics are inaudible or distorted, they’re just drawn-out and obtuse, slipping through your fingers in abstraction and long words. By sound they’re all rooted in plague, degradation, puritanism, lost faith and clung-to hatred.

Information that I should have introduced earlier: Girls Pissing on Girls Pissing are from Auckland. From the little I know of New Zealand (though, like everyone in Australia, I idealise it as a chill paradise and plan to move there ‘sometime’), Auckland is considered less cool and culturally vibrant than Wellington, but those kind of places tend to produce the weirdest art – when you’ve got something to be outside, when you’re not constantly supported by a scene of creatives. Maybe you’d be more pissed off, more likely to make something as fucked up as this grim, great album.

You can buy Songs of Sodomy and the Compost of Aethyr, with tarot or without, via bandcamp here