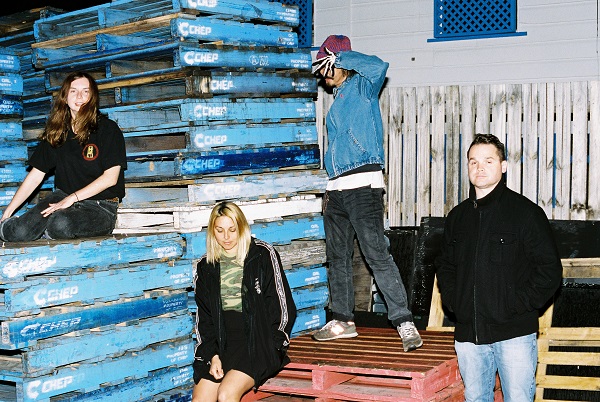 Madboots have been around drawing crowds at live shows in Brisbane forever. They make a rare kind of RnB that’s funny and good, and put on live shows that are a mixture of pure hip hop showmanship and theatre. They open and close for rock bands and usually blow them out of the water. Madgif, their beat man, stands around on stage on his phone, wears full face bandannas, takes photos or makes cup noodles (one time), while Dewi Djamal Wilson and Angelica (Gel) Wilson rap, skit, and sing. Then their producer/scratch DJ, DJ Returnagain makes the music happen. They’ve put out videos and kind-of-mixtapes before, but 2Hard is them getting serious. Or nah, not serious, just like playing into the whole make an EP, premier it through a music mag with a video thing.

2Hard’s six songs make for a tight 17 minute EP (including remix) – they’ve got a short attention span, these songs give you the idea, the joke, the vibe, then disappear without outstaying their welcome. This is what they do. Whatever if you don’t get it.

It’s a great introduction for the uninitiated. You total get Dewi’s mix of sugar-and-sex ‘90s RnB vocals and Brisbane suburban talk-rap. She’s breathy and sweet on tongue-in-cheek opener ‘Cocktails’ then tough and dirty on ‘Snowy’; ‘put this pussy on ya like a winter coat-ah’, then bratty and hectic on ‘Facts’, a hard-hitting, totally nonsense song. The dynamics of Dewi’s vocals, supported by the more straight RnB hype of Gel’s backups, give these songs their likeable let’s-party-but-don’t-fuck-with-us character.

In an interview that I’m hoping one day will get out there (my fault, I keep not writing it), Dewi told me that the lyrics and song writing in general are often based on jokes, or ideas for music videos, or just some funny phrase she or Angelica can’t get out of their head, and it makes for totally un-laboured song writing. The joy for them is often in the production, in messing around with the sounds, in making things that sound like real songs they used to hear on the radio. Madgif’s beats lay the clever and layered but always smooth groundwork for the sunny West Coast vibes of ‘Respectful and Cute’, a light-as-air love song, or the album’s super catchy centrepiece ‘Headstone’.

It’s cool that after decades of ‘Aussie hip hop’ being the butt of every Triple J or festival bashing joke, our underground RnB scene is the one pumping out the music that you wanna listen to, and putting on shows you actually want to go to.