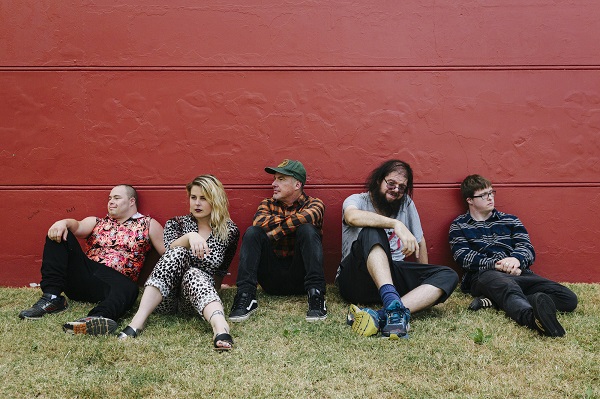 Tralala Blip have been treating audiences around Brisbane and their hometown of Lismore/ The Northern Rivers of NSW for almost a decade. In that time, they’ve continuously developed and refined their sound, and are now one of the most exciting, fun and thoughtful electronic bands in the country. Their first full-length record in five years is Eat My Codes If Your Light Falls, and now they’re inviting the rest of the country into their world of experimental music through the gaze of musicians with disabilities.

Their latest single ‘Pub Talk’ is spare and moody. The bare electronic backing leaves room for the understated tenderness of Lydian Dunbar’s vocal performance to shine – drawing you in to an easy intimacy. The repetitive, almost robotic backing beats slowly ramps up; there’s a feeling of urgency in Dunbar’s message ‘I am same but different/ my heart is full of sounds and light’. The video, directed by Jake Taylor from In Hearts Wake, is appropriately melancholy, glitchy slow-motion accentuate the feeling of alienation, while lingering close ups on the sensory experiences of the world outside Dunbar’s, making a personal longing to connect feel universal. ‘Pub Talk’ takes its time opening up, but then seems to be over all too soon, lingering bitter sweet.

‘Pub Talk’ shows a different side to the band after new-wave disco-dancey first single ‘Facing Monsters’ earlier this year, and it’s clear Eat My Codes… will have plenty to interest all kinds of electronic and experimental music fans. It’s also clear that we’ve been missing out on some amazing music from differently-abled musicians, and there’s a lot more work to be done in making Australia’s music scene open to everyone with something to say.

Eat My Codes If Your Light Falls is out on Laurence English’s Someone Good label today! Buy it here.

If you’re lucky enough to live in Brisbane, Tralala Blip will launch Eat My Codes… at The Foundry on August 1