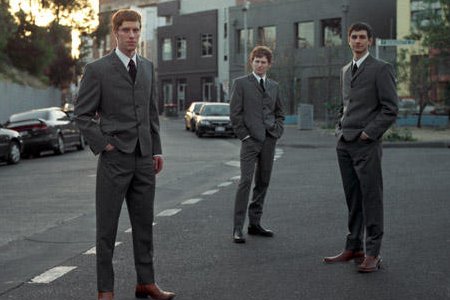 The Basics – ‘Just Hold On’

I’ve only recently heard the music of The Basics, although I’ve been aware of the band for some time.  I heard ‘Just Hold On’ on the radio and instantly fell for their retro-pop sound – it brings to mind acts like The Monkees, George Harrison, Roy Orbison and The Hollies.  It’s a welcome change from a slew of retro inspried bands who seem to be “influenced” by the same core groups.

If that voice sounds slightly familiar, that’s because drummer/vocalist of The Basics is Wally de Backer, the man behind the Gotye project.  The Basics maintains the pop sensibilities of Gotye, except unlike that project The Basics is a three-piece made up solely of drums, guitar, bass and the vocals of all three members.  They have an album entitled Stand Out/Fit In due for release early 2007 and two other tracks from the album ‘Speak to Me’ and the rocking ‘Rattle My Chain’ can be heard on The Basics’ MySpace page and a bunch more songs can be heard at their official page.