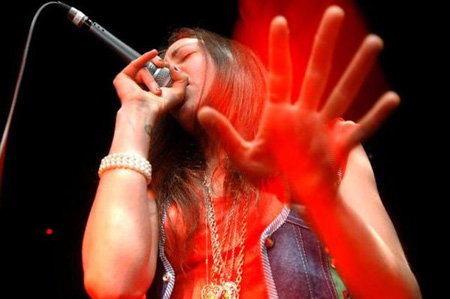 One of the most talented performers stepping into the spotlight for the year is Melbourne based MC Romy Hoffman aka Macromantics. Her debut album Moments in Movement has received lots of love from reviewers and Triple J has blessed it with a J-award album of the year nomination and consistent airplay. Produced by Sydney based Tony Buchen of the Baggsmen, her songs are dominated by tongue twisting word chains and her rapping focussed on speedy delivery with a very distinct Macromantics accent. It’s this accent that sets her apart from fellow Aussie hip hop contemporaries, and could potentially make her the first Australian hip hop artist to make serious grounds in the USA.

Soon after the album was released she announced her signing to superb American indie label Kill Rock Stars, home to Sleater Kinney, The Gossip, Deerhoof and Bikini Kill to list a few. I’ve seen her performed three times, and I admit it was hard to get her songs without listening to the album first. On Saturday she stole the stage as support for the rather underwhelming labelmate Erase Errata. As a solo performer backed by an almost invisible DJ Macromantics has an enormous amount of energy and stage presence. She exudes great confidence and harbours charisma that is hard to pinpoint why but will hold your attention right to the end.