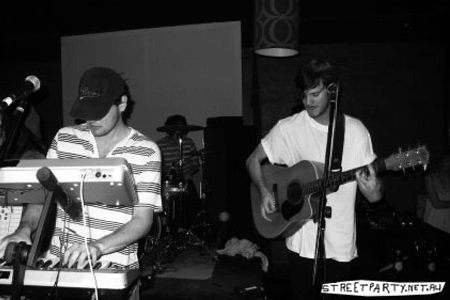 I’m risking overloading on Muscles goodness here, but he’s worth the hype. Last time we wrote on the trance boy wonder I said that he was taking time off to rejig his live set up as a band. That was the plan I believe until he just got more and more gig offers. Now there’s a national tour on the cards in April with a certain big Australian band I’m not supposed to blog yet. Anyway, the thought of seeing him with a full live band is pretty exciting. Last week I was lucky enough to get a glimpse of what his sound/setup could be in the near future.

Muscles was headlining Click Click on Saturday, he’s played there maybe twice before so this time a week before the gig he made an open call on myspace for ‘band members’ to perform the first three songs during his set: Marshmellow, One Inch Badge Pin and Ice Cream. The stage was packed with an 8 (or maybe more) guest musicians including photographer/muso Ryan Wheatley of Learn The Splits, Tranter of Gameboy/Gamegirl, the guys from Julian Nation and Popolice both of whom supported the bill, another band I didn’t quite catch the name off, and resident party animal Phil Burns.

It was quite an impromptu and very candid set up, everyone was given lyric sheets with the major chord changes in it, though I don’t think anyone paid much attention to any of it and just sorta jammed through the set following Chris Muscles’ lead on the keyboard riff. There were no prior rehearsals so some in band weren’t sure when to dive in for their parts, but I must say the rhythm section did very well with Wheatley’s backing vocals giving One Inch Badge Pin a much thicker singalong texture that was a highlight of the set for me.