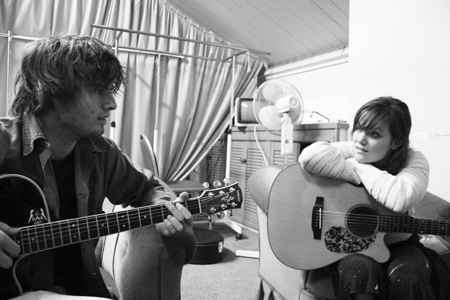 I went to Splendour in the Grass last weekend, a music festival that goes off in Byron Bay in northern New South Wales every Australian winter (that’s June to August for you northern hemispherians). Byron Bay is an area famous for laid back lifestyle, great swells for the surfing types, hippie-ish attitude with its close proximity to the drug tolerant Nimbin and an abundance of vegetarian/tofu options in restaurant menus. The drive took 14 hours with stops and it had been raining leading up to the weekend. There was not a single patch of green grass to be seen, mud was everywhere. Think Glastonburry.

There were three main stages and I went to start off at the more chilled out sitting down stage at the end of the mud trail. I sat down and saw these guys played to a half empty room which quickly filled up once Julia’s sweet voice wafted through the air. The siblings’ performance was so captivating I didn’t bother to move on to the other bigger profile tent featuring a certain hyped up Swedish prog wannabes Dungen or some other rap/dance combo at the far end stage. It has been a while since I’ve sat through an entire acoustic set, and I’m really looking forward to seeing these guys again.

Angus and Julia Stone are a brother sister combo from the Northern Beaches of Sydney. They play with drummer Mitch Connoly, formerly of the Beautiful Girls and a rotating guest bassist. While at first impression they sound like any other midweek acoustic night duo, it is really Julia Stone’s intriguing voice texture that reminds me of Joanna Newsome, albeit without the annoying shrieky bits. A lot of their numbers are down-tempo stories about domestic life and loves, though I suspect it’s only a matter of time before they find an upbeat crossover hit to take on radio.

Leave a Reply to Kara