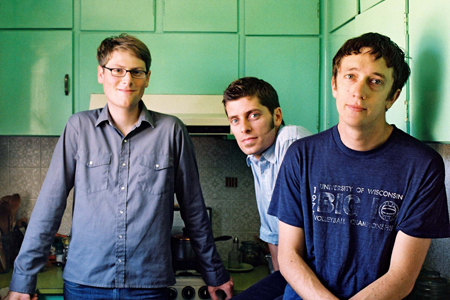 I became an instant Lucksmiths fan when I heard ‘Chapter In Your Life Entitled San Francisco’ on the radio last year, a timeless pop tune. The band has released eight albums, received adulation from the usually critical Pitchfork and toured endlessly throughout Europe and US. And still managed to be overlooked by the general public. Lucksmiths’ songs are all highlighted with quirky personal lyrics delivered by Taliesyn White’s smooth white boy pop voice not unlike Belle and Sebastian’s Stuart Murdoch.

Early this year I caught them in a very personal backyard gig when they were in tour in Sydney. The band were literally playing underneath laundry clotheslines. About 150 people packed into the tiny space, some climbing the roof and sitting on the neighbours’ fence to watch the band. The set up was a simple three piece with Tali being the stand up drummer/vocalist in the middle. I didn’t recognise most of their songs as they picked randomly out of their massive back catalog, but when they played San Francisco I couldn’t help but reminisce my own stories about the city.

The Lucksmiths – ‘Chapter In Your Life Entitled San Francisco’ (mp3)