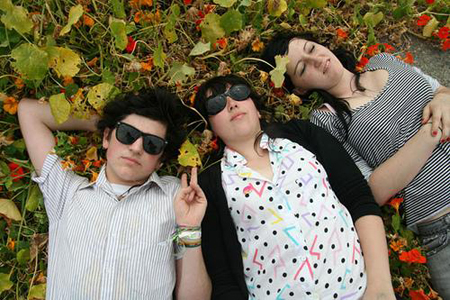 About late 2004, three teenagers that go by the name of Kiosk started gigging lots in the Sydney scene. Jack Mannix is part of the band, a music photographer who at the age of 15 took photos of Jet backstage at their hotel room and was praised for his ace photo skills. The noise-punk were getting a lot of big profile supports and scored a few internationals. Backlash soon followed and a lot of ‘I hate Kiosk’ type threads floated around the internet that eventually spilled onto the musical weeklies with bands like The Cops publicly declaring their low opinion for these kids. I’ve seen these guys about three times and I still don’t like their music. So why am I blogging them here?

To me Kiosk demonstrates the punkiest attitude a band can have. And rock music, is all about attitude. They relished in the hatestorm that surrounded them in 2005 on the internet and used that to their advantage. They ignored conventional media & alternative radio, booked an entire American tour through myspace, and even quoted hate statements for their press releases. As a result the band scored an appearance at 2006’s Big Day Out, are now putting out their EP on Calvin Johnson’s K-Records in the US, and will be touring the Sixty-Nine EP in August. Here is a 48 second sample of ‘Tourist Attraction’. The full song isn’t much longer, clocking in at 1 minute 33 seconds.