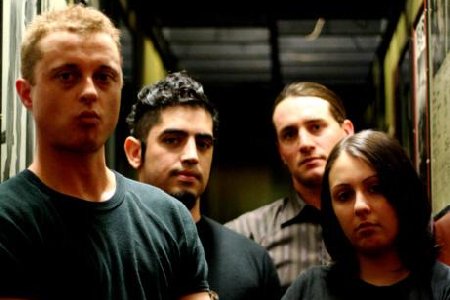 Maybe it’s pop, maybe it’s rock, maybe it’s just a sweet song… this is the first offering from The Locus Scene, a band that won the MusicOz Award in 2004 for Best Rock Artist, and they hadn’t even played a gig!

It’s been great to see this band come so far: from their first gig at the Annandale Hotel, which admittedly was a bit shaky, to now being confident, and having a slew of fantastic songs (personal fave: ‘Crowded Room’), many of which will appear on their upcoming debut EP In Technicolour.  Locus Scene frontman Luis Rojas is the brains behind most of the songwriting and recording of this EP, and if his band-in-hiatus, Shanghai, is anything to go by, there’s no doubt this EP will be an eclectic mixture of styles and instruments.  He’s just finished producing the new EP from Mz Ann Thropik ao hopefully the Locus Scene EP will be of the same recording quality.

It’s been a couple of months since these guys played live, as they’re searching for a new guitarist, but keep an eye out for their return, and their super-amazing drummer Stassy!