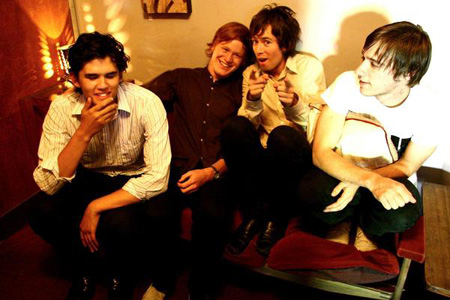 Cut Off Your Hands – ‘Oh Girl’

After a brief tour with them last two weeks this song stood out the most for me from their fast and frantic repertoire. It’s probably because the order of each night was rock-punk-hard-hard music and it’s good to get slower love song in the middle, a break for the ears. The lyrics are pretty standard courting lines that any guy would have thought of, but I guess the more important things in life are usually cliches.

Cut Off Your Hands used to be called The Shaky Hands until an identically named rock band in the US sent a cease-and-desist or something. Recently they did a deal with Levi’s jeans where the clothing label flew them to the UK, paid for the recording of their EP while letting the band keep the copyright, gave them some free band merchandise to sell at shows and lots of promotion in the press. In exchange for all this Levi’s got to use their band image for their current advertising campaign. Aligning the music and fashion world isn’t anything new, but this is the first that I know where a fashion label actually started a record label just for short term commitments, without having any intention in creating any assets in the form of copyright. Their only benefit is being seen as the fashion label that is closely involved with the local and up and coming music scene. The Levity label is in the lookout for more bands once they’re done with COYH.

I’m not entirely sure this would work for everyone. I think in COYH’s case it has worked well and the ads were done very tastefully. This idea could easily go very wrong with less discerning labels and their marketing teams, in fact I could see a copycat program happening real soon, much like how every liquor brand have their own talent search program. I’m definitely not against commercialising music, and I do believe for most music genres (excluding pop/rnb) this is a better way of doing things rather than getting involved a major label nowadays.