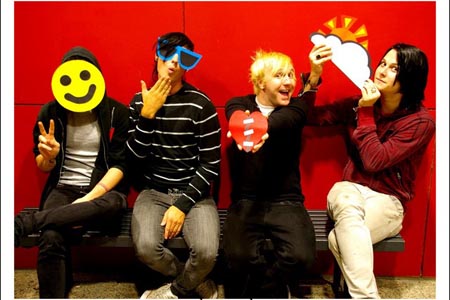 Anytime a band manages to notch up 190,000 profile views on MySpace with fairly limited radio play, it’s time to sit up and take notice.

Straight off the bat, there’s a lot of people who are going to loathe Repeat Offender: they’re a bastard mixture of rock, pop, punk and alternative sounds. But even if it’s not your thing, you have to admit that these guys are very good at what they do. They’ve got an extremely polished sound, which you may want to put down to studio trickery, but trust me these kids can pull it off live as well.

They’ve done some big gigs, most namely The Butterfly Effect and The Veronicas (weird mix I know, but one of the Repeat Offender dudes is shagging one of the Origliasso twins). The last thing they recorded was their EP To A Modern Love… and now that they’ve shed some weight off the lineup (they were once a five-piece, now they’re a four-piece), we should expect their debut album very, very soon.

They’re playing a bunch of gigs in their home state of Queensland soon, and some shows in Sydney as well, so if you dig ‘Amphetamine’, go and support them.