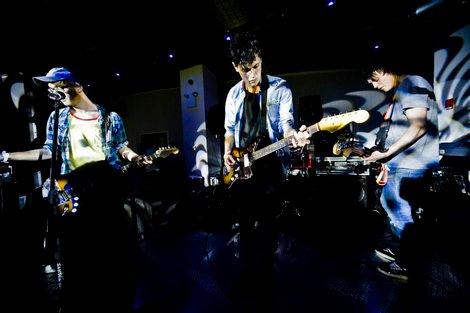 New Zealand’s Surf City have been bouncing around the blogosphere for a while now, mainly on the back of much love from Rose Quartz. But at the peak of surf rock’s reported revival, you can hear bands that sound like this on almost any Hype Machine top 50 blog. This makes it hard to get super excited about a band based on one track alone. Surf City were a bit different in that I actually remembered their name, but I still wasn’t totally sold on their wares until I heard their stuff packaged as an album. And this shit is tight. When listened to consecutively, the greatness of these tunes really starts to shine. The songs sound stronger and the strengths and quirks of the band become more distinct.

Those cunts bros over at POA beat me to the punch in posting album highlight ‘Icy Lakes,’ an eight minute collision of krautrock and beachboysripoffwave. In it’s place, I present ‘Teachers,’ my second favourite track on the album. It’s a shorter, tighter pop song – full of infectious “ooos” and the like. If you listen to both then you’ll have a pretty good idea of the awesomeness to expect from their debut Kudos.