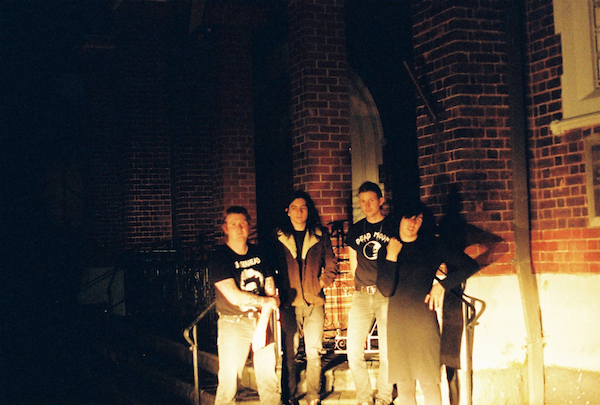 A Quality of Mercy – the debut album from Melbourne’s RVG, premiering here – is a collection of sharp, driving pop songs that draw equally from the goth palette of early 4AD and the literary proto-punk of Television. To celebrate its release, songwriter Romy Vager spoke to us about androgyny, emotional intelligence and The Twilight Zone.

Tell me about RVG – who’s in the band, what brought you together?

RVG Consists of me, Reuben, Angus and Marc. We’ve all known each other for at least a few years at least through playing gigs with each other in other bands we were in (I used to play in a band with Marc called Sooky La La).

Angus and I were sort of planning a record of my songs a few years ago that was was going to be a lush Echo and the Bunnymen kind of album. We made a few demos but didn’t really do anything past that. I made a little tape of songs taken from my Soundcloud in the meantime and arranged a small launch for it. I asked everyone if they’d be interested in playing a one-off gig as a band. We did it and people liked it and so we just kept going.

We like a lot of the same music, and we don’t get into those weird passive-aggressive fights that seem to happen with every other band. We all seem to be on the same wavelength about what’s a good idea and what’s a bad one. It’s weird, I’ve never been in a band like it.

Aesthetically, RVG and [your other band] Avoid are quite different (at least, one reminds me of Television, the other – from what I’ve heard – ‘Atmosphere’-era Joy Division), but they both seem to be drawing on sounds from the late 70s/80s. Is that an era you return to a lot as a listener? What music was formative for you?

I started paying attention to music in my teens, and at the time being a sensitive, gender-confused loner, I was very attracted to the androgyny of people like The Cure and Patti Smith, which was the closest thing like that for me growing up in conservative Adelaide. I saw Bowie on his last tour and it cemented the fact that I belonged in that universe. I’m still also a massive fan of The Sisters of Mercy. That band introduced me to a lot of non-music influences like T.S Elliot and Francis Bacon.

I love the emotional intelligence of that era of music. Everybody seems to know what they’re upset about and can express it to you clearly and concisely. I don’t like listening to anything that’s unclear about what it’s trying to tell to me.

Do you write songs and bring them to the others, or do you jam/write together?

I make little demos of songs and then usually put them on Soundcloud. Initially RVG was just sort of selecting songs that would work with a band, but as a band the songs come out very differently. ‘A Quality of Mercy’ was initially a half-speed country ballad. It sounded awful. Angus suggested we speed it up and turn it into more of an Echo and the Bunnymen song. He pretty much saved that song from being unbearable.

I really can’t do jamming, it makes me feel gross. I generally write the lyrics and most of the structure and the band builds around it. We only really rehearse a song a few times and then start playing it live. It never usually sounds any good if we work on things for too long by ourselves. Angus said once that a gig is worth four rehearsals and that’s become a bit of a mantra for me.

How did the LP come together? do you feel like there’s a theme?

The title track is named after an episode of The Twilight Zone. The American army has cornered these sick Japanese soldiers in a cave during battle. The soldier in charge is about to blow up the cave for no immediate reason. He gets knocked out or something and wakes up as a Japanese soldier who’s just been given orders to blow up some sick Americans in the same circumstance. The whole episode is about perspective and empathy, which is similar to the theme of that song. We decided to name the album after that single cause it felt like a bit of a mission statement. It’s a very moral and perspective-conscious album.

I think previously to RVG, I wrote songs that were mostly bombast and shallow, in which I would always be the voice of perfection – real ego driven songs. I think so much in my life has changed and I’ve been able to write stuff in the last few years that has a lot more empathy. The album feels like the shedding of some kind of old skin. I think that might be a bit to do with being trans, and maybe because I don’t take as many drugs as I used to.

Do you have a favourite track on the album at the moment?

‘A Quality of Mercy’ will always be my favourite. I was really proud of myself when I wrote the lyrics to that song, and watching it grow with the band has been really beautiful. It’s also really interesting to play the part of the second character in that song when we play it live. I really like to get into it.

RVG launch A Quality of Mercy at the Tote on 3 March w Scott & Charlene’s Wedding and Girl Crazy.