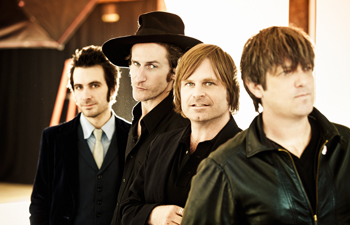 You Am I – ‘Trigger Finger’

I’m pretty sure every Australian music fan at some stage in their life has flirted with You Am I’s backcatalogue. It may just be one album that you totally got into, and maybe you haven’t listened to YAI for over a decade, but you still had a little sumthin’ sumthin’ with them. Even the fresh-faced Triple J listeners in grade ten probably know ‘Berlin Chair’ or ‘Cathy’s Clown,’ even if they can’t name the band.

Well, they’re back again with their 7th studio album, which is being put out by indie label Other Tongues this time around. It’s probably a good move for Tim Rogers and co, since I’m not too sure what a major label will really offer them at this point. No doubt the apex of their crowd-pulling potential is upon them if not slightly behind them and I imagine the bulk of their income is from their relentless touring on the back of each album. So it’s a positive move and probably and exciting one for both parties.

Above are the first two singles from the self-titles album. Check them out, yo.