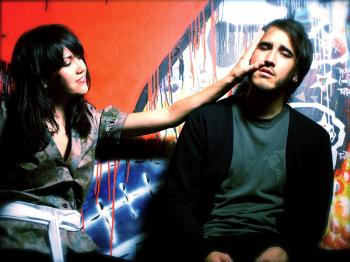 Named after Pnau and Teenager’s Nick Littlemore heard the song we’ve blogged here, Soma For Kinder are a two-piece (but four piece live… when they actually play… OK, that’s harsh, but I’ll come back to it in a sec) who reside in the beachside suburb of Bondi, in Sydney. Sultry vocalist Tanya Horo originally hails from New Zealand, but when she moved to Oz she was befriended by Jono Ma, who has produced acts like Lost Valentinos (when they had the “The” in their name) and teenagersintokyo, and is one of the DJs in The Knife Machine. The two then formed this rather dreamy indietronica act.

The group has released one EP, and now they’re basically in hiberation (hence my dig before: “when they actually play“). But news from their MySpace site says they’re working on a new album, so keep a lookout for that. If you love Decoder Ring, you’ll love Soma For Kinder. It’s the perfect nocturnal soundtrack.

Leave a Reply to lastfm