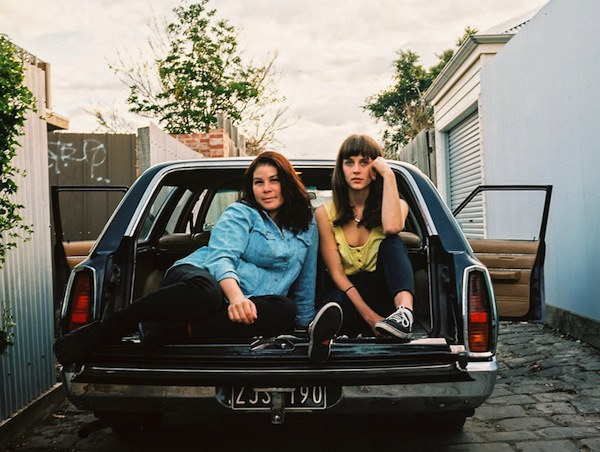 Erica Dunn debuted Palm Springs just last October, releasing a pair of 7″s that sound like dust-streaked sunlight. Now, the SMB having hung up the fishnet stockings for a little while, Dunn’s been back in the studio, her group rounded out to a trio to record a new cassette. Engineered by the Drones’ Dan Luscombe and mastered by Mikey Young, the Flowers in a Vase EP features an updated version of the sublime ‘Winning & Losing’, a charming Randy Newman cover (with more harmonica than honky tonk, to be sure) and a suite of aching gothic-country numbers, delivered in Dunn’s dusky contralto.

Palm Springs are launching the cassette tomorrow night at the Gasometer Hotel. Calamari Girls will be playing in support (along with Caroline No), so this feels like an excellent opportunity to talk about the Before Darwin Tape.

Calamari Girls features members of Melbourne garage punks Constant Mongrel and the Shifters. Quietly released in July 2015 via Al Montford’s Hideotic Records, their sole release has flown more or less under the radar. There’s not much press out there on these guys; one of the only leads to follow is a cryptic message left on their Bandcamp page: ‘Long live Takashi Mizutani’. It’s a reference to the frontman of Les Rallizes Dénudés, a Kyoto band that operated in the late 60s, making long-form, DIY noise rock inspired by the Velvet Underground. This actually tells you a lot of what you need to know about Calamari Girls. Scrappy but charming, the Before Darwin Tape combines post-John Cale, pre-Loaded Velvets with the naive pop of the Beat Happening. In short, it rules, and it’s available right now as a free download.

While I’m on the subject of cassettes, I found this one mooching around on Bandcamp:

Lalić is led by Melbourne’s Mladen Lalić Milinkovic, a GNC artist who’s been recording under their mother’s maiden name since high school. Milinkovic has described Bed Tape as ‘an interim release’ before a third LP comes out later in the year, and it does have an ephemeral feel – more a collection of textural experiments than a song-driven album. Its palette drifts somewhere between Animal Collective’s early acoustic recordings and the narcotic teen fantasies of Foxes in Fiction. Milinkovic moves tentatively, testing out a melodic phrase, a synthesiser setting, a sample – adding layers almost haphazardly to the mix. The results are surprisingly lovely, with songs that stumble, frayed, then miraculously coalesce: reaching, collapsing and reforming.

Bed Tape is out now through World News Records.