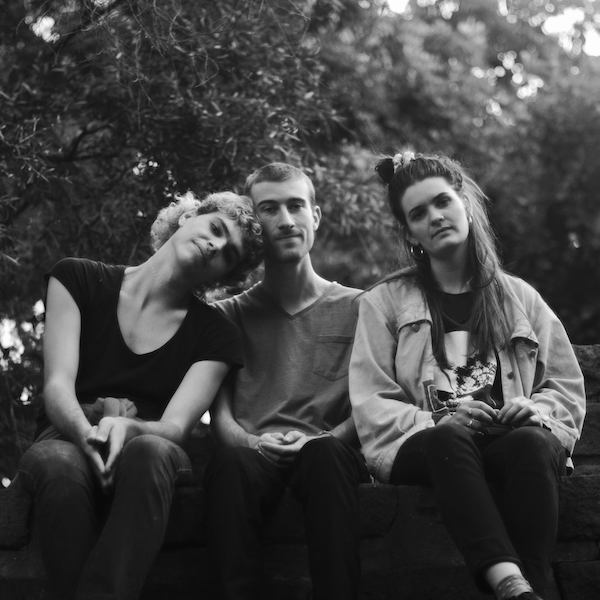 Having released a compelling set of country-punk tearjerkers late last year – the brilliantly titled ‘Having pop punk feelings in a country-western body’ EP – Melbourne-based three-piece Two Steps on the Water are now gearing up for their debut LP, God Forbid Anyone Look Me in the Eye. The band – comprising violinist Sienna Thornton, drummer Jonathan Nash and frontwoman June Jones – yesterday released ‘YoYo’, a tender, Kate Bush-referencing ballad underpinned by the trio’s lilting harmonies and Thornton’s intuitive counterpoint. Today we’ve got the video for you, beautifully shot in soft afternoon sunlight by the Yarra. June Jones spoke to us via email about the new record and the band’s upcoming June residency at the Gasometer Hotel.

Can you tell me what ‘Yoyo’ is about? did you write it for someone in particular?

‘YoYo’ was primarily written for myself when I was younger. I have suffered from post-traumatic stress disorder since I was 14, which made life pretty hard especially when I was a teenager. I used to beat myself up about being so terrified all the time and it took me a long time to realise that I wasn’t to blame for my trauma. ‘YoYo’ was written for me back then, but also for anyone who needs to hear that it’s not their fault, that they are beautiful and dangerous. I should probably mention here that the first two lines of the chorus are totally ripped from ‘Cloudbusting’ by Kate Bush (a timeless classic).

Is there a narrative behind the video clip? It’s a gorgeous setting – where’d you guys shoot?

Nah, no narrative. The last clip we made (for a song called ‘More True More Rowdy‘) was pretty heavily rooted in narrative, and we filmed that in a few different locations which meant that it was a pretty time-consuming process. This time around we just wanted something simple and pretty. Working with absolute legends Nina Renee and Olivia A Fay, we filmed the whole thing in Fairfield by the Yarra. One half was at the beautiful amphitheater and the other half was with a group of friends in a clearing that Sienna knew about (and I think people put on raves there sometimes?).

Congrats on recording your debut record! Can you tell us about how it all came together – the writing and recording etc? How would you compare the new album to HPPFIACWB, whether aestically or thematically, or the process in general?

Hey thanks! We wrote all the songs in the second half of last year I think. Made some demos in Sienna’s shed and sent them to Simon Grounds (who was recommended to us by our friend Laura Jean, an amazing Melbourne musician). Recording took place from early February through to late April, starting at Bakehouse Studios with Simon and then RMIT with some friends who are studying sound production, then doing all the overdubs at Simon’s home studio.

Aesthetically I think we’re working with similar ideas to what’s happening on HPPFIACWB, but there’s no electric guitar this time around. Thematically I think God Forbid Anyone Look Me in the Eye is more coherent. I’ve realised that lyrically I tend to tackle three themes over and over again, and those are trauma (spanning the last 10 years), my social experience as a trans woman (the last year and a half), and lastly the object of most songwriting ever: love and romance. The three overlap and intermingle and fight between each other. For example, there are three songs about love/romance/sex on the record but two of those are very much about my experience of these things as a trans woman looking to be recognised as such by my partner.

You guys are great at encapsulating your work in titles; ‘having pop-punk feelings in a country-western body’ sums up your sound pretty perfectly. I was wondering if you’d mind elaborating on the new album title?

I didn’t realise how representative of our work the title of ‘Having pop punk feelings in a country-western body’ was when we agreed upon it. I just thought it was a pretty funny title. It was a lyric salvaged from a song that we recorded for that EP but never ended up releasing. God Forbid Anyone Look Me in the Eye is the second line of the second song on this record, and I think it sums up the vibe of a lot of the lyrics throughout its nine songs. I have a hard time just being in public, and I wear sunglasses as often as I can without seeming like an asshole. In the context of the song ‘My Medusa’ the line is a reference to meeting eyes with the titular character (a role played by any stranger on the street ever) whose eyes can turn me to stone, which I guess is all about anxiety/PTSD/being vulnerable as a trans woman in the world.

Do you guys listen to much country music (or at least a bunch of Drag City LPs)? Or is this just how the sounds come out when you three are playing together? What bands have inspired your sound?

Sienna and I have definitely listened to quite a bit of country music, and while I don’t think it’s heaps Jono’s bag, he and Sienna used to play in a bluegrass band a few years ago with my old housemate. It wasn’t overly intentional to start a Country Band, and I wouldn’t really describe us that way, but the combination of acoustic guitar and violin definitely does evoke that vibe at times. I’m a huge Drag City fan, with stuff like Joanna Newsom and the Silver Jews influencing my songwriting in a pretty big way. People compare us to the Dirty Three pretty regularly, for which I blame Sienna (just kidding, they’re great), but I guess that’s what happens when you’re the only band with a violinist on most bills, lol.

I love your singing voice – mercurial and sort of old-timey, kind of like a yodel. How’d you stumble upon that style and realise it worked for you?

I think I started doing that yodel-y thing when I was 18 or 19 and just starting to sing. I was really into that band Clap Your Hands Say Yeah, and imitated the singer’s style for a while. Since then I’ve had fun incorporating stuff like screaming and singing in falsetto into my vocal style. I still feel very much like a beginner with singing. I’m aiming for the whole Joanna Newsom thing of developing my vocal ability throughout my career as a musician, album by album, ha.

You guys have got some amazing artists joining you for the Gaso residency. The choices seem to be in the same spirit as Transgenre – lots of femme and non-binary voices, and a mixture of bands and spoken word performers. What drew you to these artists? What’s your connection with the spoken word scene?

Yeah the Gaso residency is gonna be great! We feel super lucky to be able to play with all of the artists on the lineups. I came into the trans music scene soon after coming out as Not A Man, and all of those performers on the lineup are friends. We’re so fortunate in Melbourne to have such an elaborate and diverse group of trans and GNC artists, as well as the broader feminist side of the music scene. The queer thing is what connects me to the spoken word/poetry scene (I’m not really that connected to it at all to be honest). Jules, who is reading on the first night of the residency, is a friend of mine who we’ve performed alongside of at least 3 times before. Her poetry hits me really hard, which is rare because I usually feel like I don’t get poetry. And Kylie Supski, who is reading in the second week, is truly a force to be reckoned with.

Transpixies looks intriguing. Can you tell us about them?

Yes! They are amazing. So it’s a Pixies cover band made up of two trans women and a non-binary person, all friends of mine with their own amazing solo projects (Simona Castricum, Brooke Powers and Geryon respectively – look them up!). I’ve seen them play a few times now and can confidently say that they do the songs so much justice and are also more entertaining that the Pixies were when I saw them at V Festival in 2007. I was pretty stoned though.

I’ve been seeing more and more trans and GNC/non-binary artists on line ups in Melbourne over the last year or two. They’ve surely always been there, but visibility seems to be really growing at the moment. What’s it like being a trans artist in Australia right now?

Yeah the trans/GNC and queer music scene is definitely going strong at the moment. It’s bloody great. I honestly can’t speak for anyone else, but being a trans artist in Australia – for me – right now is… okay. On the one hand we get a lot of support from the queer community and each other, meaning that gigs can feel more like a party than just another show. But at the same time there are some real obstacles. The most obvious to me being that I regularly play shows with only male and female bathrooms, and while I am a trans woman, I don’t always feel brave enough to use the little girl’s room when I’m alone. I’ve been kicked out women’s bathrooms before and have no desire to use the men’s, so I’m a pretty big advocate for non-gendered loos. Not to mention the fact that heaps of people don’t identify within the male/female binary! Beyond that there’s the problem of tokenism – being understood only through the lens of gender and not for your art itself. And don’t get me started on the idea of touring. Melbourne is pretty cool a lot of the time, but I can’t speak for other cities let alone small towns. Being trans is confronting (to others and consequently to yourself) and we have a long way to go as a society to make trans people feel safe, comfortable, and accepted. We’re doing an album launch tour in August and while I’m super excited, I’m also nervous to leave my comfortable Melbourne bubble.

‘YoYo’ is out now on Bandcamp, with God Forbid Anyone Look Me in the Eye due for release in August.

Catch Two Steps on the Water at the Gasometer every Tuesday in June. They’ll also be headlining The Lifted Brow‘s issue 30 launch party on 11 June, alongside Jessica Says and Pillow Pro.