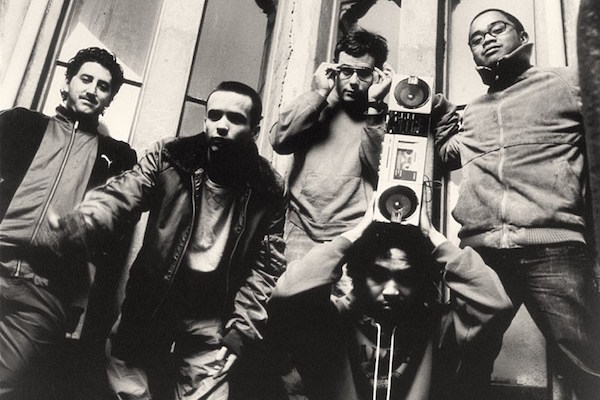 As you may have heard, the Avalanches (along with Spank Rock, HABITS and YOUNG TAPZ) have been parachuted into the 2017 Sugar Mountain lineup in place of Dev Hynes’ lauded Blood Orange project. As the chatter around the group’s much publicised hiatus and ‘triumphant comeback’ fades ahead of the promise of more new music and a run of high profile live shows, it’s easy to overlook the breadth of their discography. After all, the once five (or six… or seven) strong group began releasing music 20 years ago, and as unlikely as it sounds, at one stage in the early noughties, they could almost be considered prolific – especially if you count their fastidiously produced mixtapes and dj sets. So, without further ado, we present the history of the Avalanches in five deep cuts.

This is the B-side to the Avalanches’ first ever 7”, from 1997, and the first release for Melbourne label Trifekta (who would put out heaps of great stuff by artists like Architecture in Helsinki and the Go-Betweens). The A-side, ‘Rock City’, was reworked to appear on the El Producto EP, but ‘Thank You Caroline’ was a live staple performed in much the same form as it appears here. The song’s woozy organs and wistful tone would recur throughout the group’s discography; it’s basically the blueprint for Wildflower’s two closers (and standouts) ‘Stepkids’ and ‘Saturday Night Inside Out’. The song clearly resonated, too, earning a new lease of life with an Andy Votel remix on the ‘Since I left You’ single.

This EP marked the Avalanches’ transition from noisey Melbourne rap brats to the electronic collage thing they’d be celebrated for after Since I Left You. A slightly reworked ‘Electricity’ would appear on that album, keeping Sally Seltmann’s operatic vocals and Daft Punk drum samples, but the fun and experimentalism showcased on the EP’s other tunes signalled an expansion of horizons. The EP was also the band’s first for Modular, heralding a distinct change in direction for the Sydney label. Until this point, Modular’s major releases came from acts like Ben Lee and the Living End. Electricity saw them begin leaning towards a much more electronic roster, and arguably fostering a new Australian scene in the process.

The B-side to ‘Since I left You’, this soft house jam coincided with the Avalanches’ stint as some of the most in demand party djs getting around. Presumably an outtake from their debut LP, it’s one of the group’s few productions that betrays their admiration for house producers like Ernest St Laurent and some of the gentler releases from Thomas Bangalter’s (Daft Punk) Roulé label. While their ‘Breezeblock’ dj mixes are still guaranteed crowd pleasers nearly 15 years on, this seven minutes of laid-back house paved the way for producers like Washed Out and Memory Tapes. If all tropical house sounded like this, the world would be a better place.

With the acclaim that followed the release of ‘Since I left You’, the Avalanches became in demand remixers for a number of du jour UK artists of the early 2000s, among them Badly Drawn Boy, Manic Street Preachers and the Concretes. This reworking of Scottish darlings Belle & Sebastian was one of the last remixes they’d do in this uncharacteristically prolific period, and was a clear display of their love affair with Caribbean soca music. At the time, one of the most striking things about this release was that the group had recorded live musicians rather than sampling them – samples having formed the bedrock of much of the band’s recent catalogue. Get the full story on this one via Wired.

Released in 2013, deep within the band’s dormant period, what’s perhaps most remarkable about this tune is how little fuss anyone made on it’s release. Not only is it a certifiable ball tearer, but it does what any great remix should – reframe and highlight elements of the original material for a new audience. For a generation who only knew Hunters & Collectors from drunken singalongs and footy grand finals, this rework brings out the original’s groove and muscularity, the way it might have sounded live back in 1982.