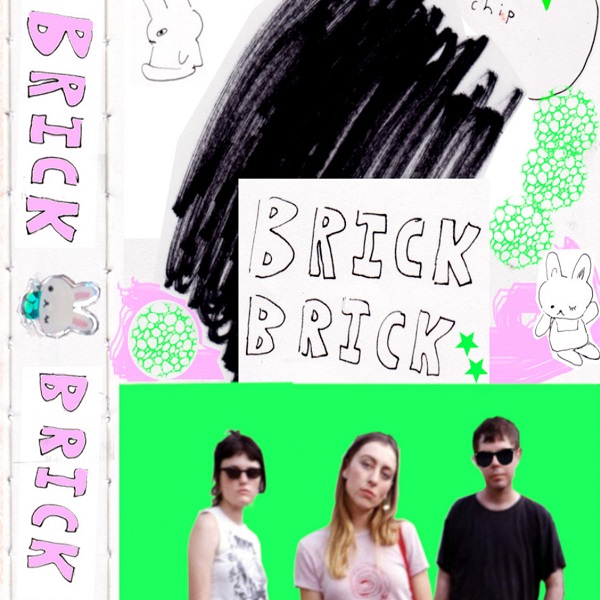 Brisbane forever favourites Bent may have stopped playing a couple of years ago, but singer and multi-instrumentalist Heidi Cutlack has given us plenty of good music since then. Her solo project Scaredy Snake was breathy, stripped back pop, and now, with bassist Phoebe BMX (from Come Die In Queensland, who released a truly terrifying tape early this year) and Matt Kennedy (from Kitchen’s Floor, of ‘pissing people off at The Sydney Opera House’) on drums, Brick Brick is Cutlack moving away from cuteness or naivety into something more disillusioned, heavier and ah, more rock.

Cutlack might be channelling a bit of Kennedy’s downer-than-you lyricism in the opening track’s drawled, ‘everyone is boooooooored / everyone is saaaaaaaaaaaaad’, but then, that song’s called ‘Sooky’ so you know it’s more tongue-in-cheek than that. ‘Sooky’ is that belligerent brat we can all be, grumpy for no reason, picking fights with whoever, and it’s making no apologies – a ratbag song and a fun listen.

Cutlack’s voice on this EP is strong and expressive – pouting then powerful, sinister on ‘Fill Me Up’, then plaintive and desperate on ‘Houseshow Song’. ‘Houseshow Song’ is chaotic and catchy – one you could imagine shaking some floorboards and inviting noise complaints. Anyone coming to this record looking for Bent’s wonky pop savant won’t find it, but there’s plenty to like in this collaboration of Cutlack’s bare-bones poetry with BMX and Kennedy’s tough-as rhythm section. The bass especially fills up all the cracks with a deep kind of muck. Combine that with the thick, uncomfortable, production, Chip 4 Chip is the kind of tape that makes me pine for Brisbane.

You buy a digital download or cassette with secret track from Eternal Soundcheck.