Let us consider Steven Wright’s new single ‘Exposure’, from the forthcoming album Repetition, through the above photograph. In the photo Steven Wright stands on a makeshift soapbox, looking forlorn, stripped and self-degraded with the limited movement of only being able to leap or remain stationary as his ankles stand drawn together by rope. His disastrousness and bare-all demeanour, depending how well it’s pulled off, looks like a great show. While every powerful performer is their own kind of vaudeville act, Wright’s stance is exactly how I’d imagine someone singing ‘Exposure’ would look. Wright appears as if he’s going to go for it all, or he’s going to walk away saying ‘fuck it all’. He looks like someone who both wants to perform and is tired of performing. Or more precisely he looks caught in the act of performing, which itself necessitates Wright’s own self-awareness in performance.

To be riddled with this kind of self-awareness is both a devastating self-consciousness and yet also strangely comforting in its truth. The frozen moment looks like a slip between an artist performing on stage and a man unwittingly caught out – it has both an ironic detachment and a complete sincerity. It’s akin to watching someone know the impossibility of being truly sincere, knowing that the stage is resolutely performance and yet instead of indulging in the irony of the moment, over-performing by sincerely acknowledging the theatre of everything.

Exposure is either a great bravery or a deep shame and for Wright exposure seems to linger on emotion, or lack thereof, as it begins with an “openness to any present feeling”, as Wright pushes through the spectrums of either over-feeling or under-feeling but never really, you know, feeling. Yet of course talking about the hardships of feeling and not-feeling is itself a feeling-inducing sentiment and, as Wright tells us, “in that volatility, vitality is found”. The dark dreamy piano and synth music works by affect and I see you’re like “yeah duh most music works by affect/emotion/tears” except ‘Exposure’ isn’t some simple one-way emotional appeal to make you feel melancholy or anxious but instead toys with structured melodies to retain a sense of hope alongside the gloom. Perhaps this sounds mighty cliche, we might even look upon the above image as cliche, but the strength of the vulnerability and honesty in Wright’s music and words demands that his work must be taken sincerely and seriously. ’Exposure’ reads like a person in control of their own song, but not their own life. It has depth, awareness and a sick humour – which is all I ever really ask of a song (or art).

Despite all my above pomposity there are various practicalities that images and sounds aren’t going to tell you. One of these things is that Steven Wright is from Hobart. That’s he’s been involved with Bi-Hour, Wasted Idol and Bad Cabin. That he’s release an LP of noise music under Polanyi.  That Repetition is Wright’s second solo album and will be released by Virtual Cool on August 15 (a tentative date) and you can get ya preorders now. That Wright will be playing select shows through Europe in August. 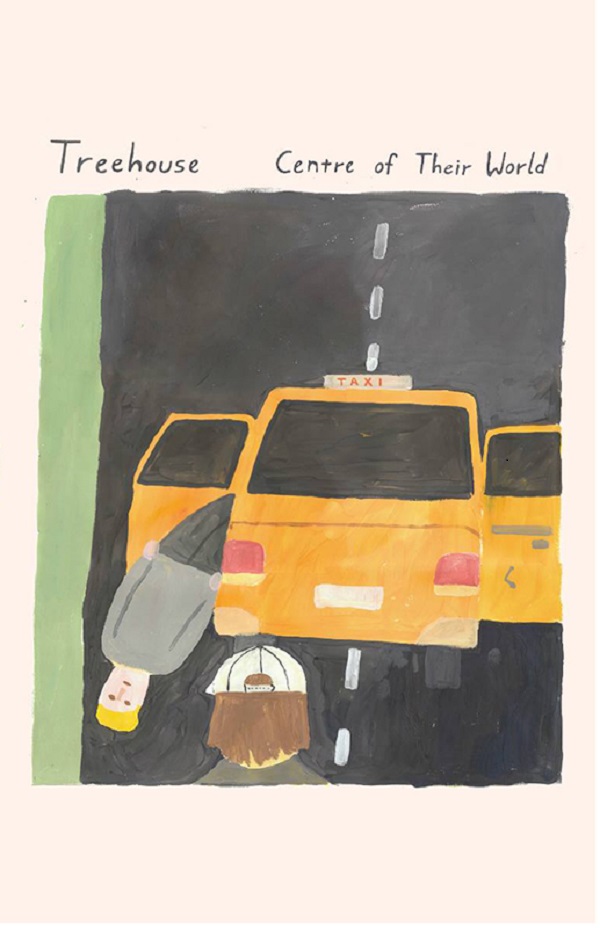 ‘But the centre of whose world?’ I ask of Treehouse’s new release Centre of Their World. Taken negatively it’s a nod to modern-day narcissism. I’d like to think it beckons more toward Treehouse’s own aesthetic world. That music, in it’s utopian ideal, is a world of its own making and your band is that warm marshmallowy centre. It’s an intuitive world. It’s the nicest thing in the actual world.

Treehouse are Hobart three-piece Cal, Jon and Will and they have a classic three-piece line-up. If rock music and it’s jangle manifestations are the genre, then the guitar is the instrument which is forever being called-out for running out of ideas. Too passé, they say. Too phallic, they quip. And yet here are Treehouse showing us that our knee-jerk doom-and-gloom over rock music is as unwarranted as it is tiring.

Released by Oz-institution Vacant Valley the album’s first single ‘She’s A Mystic’ seeped onto our Facebook feeds at the beggining of this year and enough great things have already been said that I needn’t rehash.Yet despite Treehouse feeling validated in releasing ‘She’s A Mystic’ as the album forerunner, ‘Hammer On The Door’ is the album’s actual pinnacle with its sweetness and pliancy, its aggressiveness and visceral nature.

It has one of the most identifiable and subtly grand guitar riffs I’ve heard from a local Australian band in a long time. It’s such a fucking seamlessly building song that does all the right things in all the right places. Considering this, it’s a miracle the song doesn’t dwindle into cliche, but teeters on the highs and drops we’d expect while adding an indecipherable something that keeps us listening. Maybe it’s in the production, which is wonderfully normal in it’s disregard for lavishness (which often just turns all rock/punk songs to plastic anyway).

In many ways Treehouse is Australian in the way that ACDC, The Church, Go Betweens and Powderfinger are Australian. This is a horribly abstract thing to say because Treehouse aren’t actually similar to any of these bands and yet there’s a feeling of geographical locality that signals that these songs could not have come from anywhere else.

Ultimately Centre of Their World heralds the in-between stance of much music at the moment; it doesn’t exactly try to change the social contract and it isn’t aesthetically wild but nor does it aim to amuse, please or entertain. Treehouse are certainly a band of their time. What Centre of Their World offers is something many local bands could use a lesson in: thoughtful songs rather than boring dribble melodies, horribly painful pastiche or a reliance on tedious spectacle. While Treehouse of course repeat the jangle-tropes and compositional build-ups we’ve heard before, this is a mute point because they do so in such a way that rejects a boring rehash of the past and doesn’t shame or tinge the memory of the old.

Centre of Their World is out now on Vacant Valley with a few limited edition cassettes on the horizon.