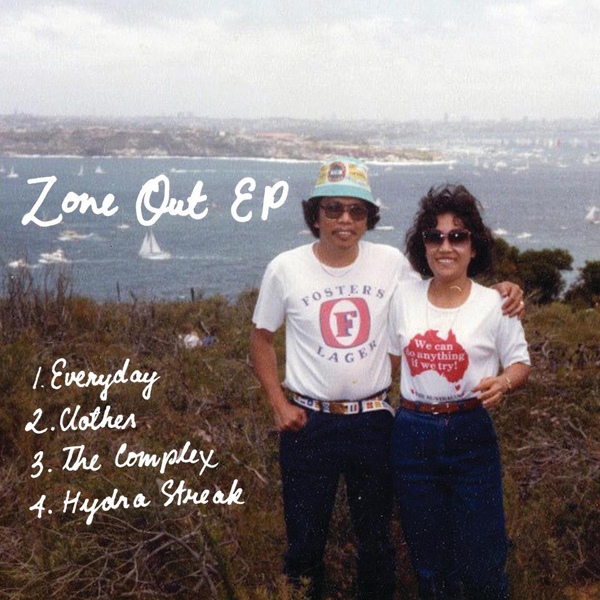 Putting your old folks on your cover, what a salute. If I had a dad who looked this stoked to be standing in a scrub patch and a mum who should have considered running for parliament (one inspirational t-shirt at a time), I probably would too. Anyone who grew up in Australia with ethnic Asian parents will probably empathize with a long withstanding history of long-shot scenic panorama snaps, ill-fitting bucket hats and dad trying to assimilate by wearing Australian beer merch out in public. Mum worked for Fosters Group in the 80’s, so I know what it was like to be the dinkum ethnic in prep class with a pencilcase full of lager branded corporate stationery.

Anyway, the offspring of the chummy couple on the cover is Zone Out – the bedroom project of Melb based Ashley Bundang. She’s previously released some other more textural, electronic based stuff under White Australians, but Zone Out is a lot janglier and pared back. While the simple, repetitive harmonies and crunchy treble guitar shelves this track against the slacker manifesto coming out of Melb, Zone Out’s got a cool tone to her voice…which makes humming about everyday stuff much more sweet.

You can grab the EP over here. (I think the EP was mixed by the dude wearing the ‘Slim Dusty’ tshirt at this Mining Boom gig, so all the more reasons to do so). Zone Out is playing her first show Thurs 18th of October at the Gasometer Hotel w/ Autoportraits, Mining Boom and André.