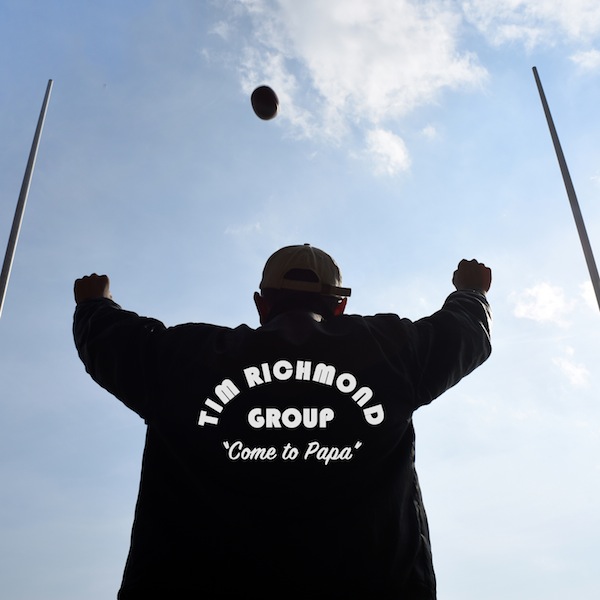 A chef and a publican (he co-owns the lovely Longplay in North Fitzroy), Tim Richmond has been composing songs, slowly and steadily, since 2008, using a guitar he first bought as a teenager. His last record, Dot, consisted of stark, skewed guitar pop, as idiosyncratic as you might expect from a businessman with the freedom to experiment, tinkering determinedly after hours.

Richmond’s first two solo records were made with local stalwarts like Declan Kelly, Nick Huggins, Kishore Ryan and James Cecil. For the latest Tim Richmond Group release, What’s in the Middle?, he’s convened another all-star team, with Mark Monnone of the Lucksmiths, Monnone Alone and Lost & Lonesome Recording Co. on bass and Joe Alexander of Terrible Truths and Bedroom Suck Records on drums.

Lead single ‘Come to Papa’ sounds slick and dense compared to Richmond’s earlier work. In place of Dot‘s spidery riffs, he’s opted for bright chords and effects pedals, and a characteristically agile bass line from Monnone is well paired with Alexander’s featherlight drumming. Cheerful, wry and just a little creepy, the track’s basically a football anthem for cool dads – with a sneaky change of time signature to underscore the strangeness of this chorus: ‘Come to papa / Bada bing bada boom … Booya!’

What’s in the Middle? is out on 1 July via Lost & Lonesome. You can catch Tim Richmond Group supporting Cool Sounds at Hugs & Kisses on Saturday night, and at Lost & Lonesome’s Gasometer residency on Tuesday, 17 May.