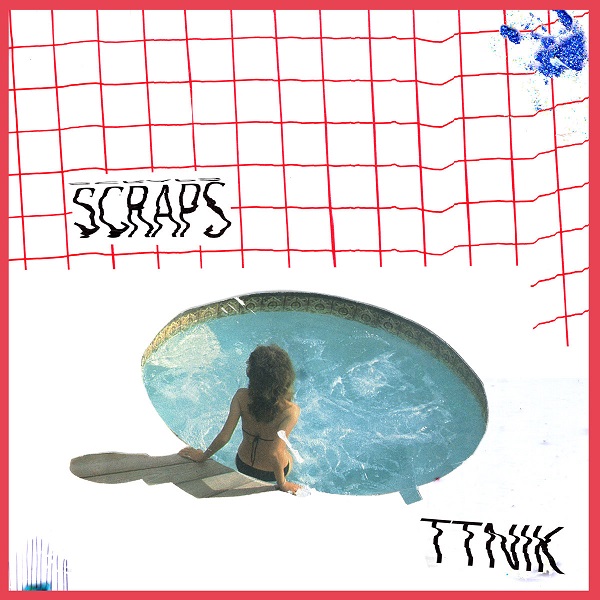 Isn’t it cool when someone who you really love from their mad funny Facebook presence and their anxiously magnetic live shows releases something that’s more than the sum of all those adjectives? I love Scraps (Laura Hill, from Brisbane) cause she’s been making synth pop music in Brisbane since way back when everyone else was still doing the Ty Segall thing. TTNIK (uh, said ‘Titanic’ obviously), Scraps’ third LP, is a fun record that’s brave enough to be kind of naïve and guileless in parts – you’d have to be real committed to your unimpressed vibe not to wanna move around to songs like the whispery and scattered ‘Touch Blue’ or sleek new-wavy ‘She Devil’.

It’s also got those slowed down interludes and random talking parts that mean they could put it under the ‘weird’ tag on Bandcamp. I get it – even though it seems kind of lazy to call songs like ‘Relate to You’ weird or unsettling: anything with out-of-sync piano will always sound like it’s straight of a ‘hysterical woman spirals into madness’ movie. But there’s still something about the rave-y drum machine over the spacey vocals singing ‘You feel so good in my mind / I wanna relate to you’, trying to reach out to the listener through the effects, that creates kind of a desperate and dangerous mood.

‘Harlequin’ is the necessary counterpoint to ‘Dreams’, the LP’s hopelessly romantic opening track where everything’s a little too good to be true. Here the vocals are buried; the drums plod forward. Nothing’s effortless anymore and the sad beauty of her voice sometimes strains and cracks with feeling. It’s probably my favourite track on the record.

There’s a great focus to TTNIK – there’s heaps of stuff going on here, but it flows smoothly and moving from one beat to the next is never jarring. That might be ‘cause Hill recorded and produced it herself – this is what happens when an artist gets to represent their own vision from start to finish. It just works.

TTNIK is out on Moontown (that Canberra label that seems to love snaking Brisbane’s most interesting releases) right now. If you’re lucky enough to also live in the New World City, Scraps is playing on Friday at The Haunt with our favourite Tasmanians Treehouse, and well as Brisbane big dogs Per Purpose, Brainbeau and Amaringo.