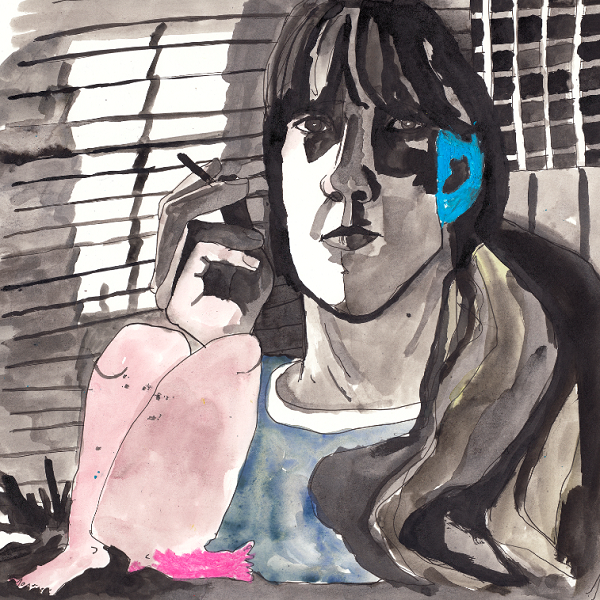 At an art show in a convict-built gunpowder warehouse in Hobart someone brings up Sarah Mary Chadwick. They’re telling a story about a New Year’s party where they’d turned off the party songs playing at midnight to belt out songs from 9 Classic Tracks. ‘Have you heard the new one?’, I ask. They say they haven’t. ‘It’s much much sadder’, I say ‘it’s really… hard’. Their eyes light up. ‘Oh fuck yeah.’

Is it unfair to call our love of public sadness a kind of fetish? We respect people who spill their guts in public because in real life it still feels kind of illicit. Like when you start to get into an unexpectedly deep conversation with a not very close friend and start telling them about an ex boyfriends dick problems or some mutual friend you actually hate or how you once took a lot of pills ‘just to see what would happen’, and then afterwards feel that rush of regret. Revealing ourselves feels good, until the shame hits.

But this record. This record is harrowing. It’s hard to look at right in the eye, real depression. When you’ve made so much of your life about being an unlucky sadgirl. Then you realise you’re pretty well adjusted and life is not bad. And THEN a record like this comes along and puts you on your knees with its power. That weak part of you hopes that it’s kind of put on, a bit of artistic licence to make a record. Maybe at shows she makes a couple of jokes about what a downer it is, says something ironic to lighten the mood. But right here and now all we have is this music.

Gone is the one-organ show and tinny dance beats. The minimalism and slight dinkiness that alleviated some of Roses Always Die’s darker moments. On first listen Sugar Still Melts… might have you begging for a hint of a drum machine. Something that takes you, if not to the dance floor than at least to the corner of the bar, swaying your hips and looking come-hither at whoever catches your eye. But instead it just builds and builds, the enormous weight. ‘It’s Never Ok’ is so dramatically catchy, the music sounds like she’s about to turn it all around and bust out some great empowering life affirming line that just never comes. The chorus is ‘I’ve got a lifetime of practice/ at keeping the hurting inside/ and tying myself to a lover/ who can’t tell I’m even alive’. I interviewed Chadwick once and she talked about the image of ‘Life Is a Cabaret’, this huge sad show tune at the end of the musical Cabaret. And even though she was talking about Roses Always Die at the time it feels even more apt for this record, especially in the beginning with songs like ‘Flow Over Me’ and ‘It’s Never Ok’. It’s full of showstoppers that leave you bruised but like you want to go back and feel it over and over again.

We (listeners, music writers, whoever) often want artists to grow and progress in a recognisable narrative. We like breakup albums followed by love albums followed by ‘mature’ records about life and art. We like stripped back acoustic records followed by balls-to-the-wall highly produced pop records followed by a nice middle ground. The way Sarah Mary Chadwick is growing is something hard to recognise. To say her records are getting sadder is reductive. Nothing comes close to the dewy sweetness of something like ‘Aquarius and Gemini’ off Nine Classic Tracks, but really it’s about diving deeper and deeper into the feelings that have been around forever. She’s rejecting another kind of narrative too, the one about grief, the ‘time heals all wounds’, the one that tells people to stop talking about it, to stop making people uncomfortable. ‘Dancing Slowly’ is a heartbreaking picture of how you can become trapped in moments that have defined you, getting stuck and watching the world pass you by, needing help but knowing no one can give it ‘I just need a lighthouse/ I just need some energy’.

She’s still a searing judge of character, the way she strips an ex-lover down on ‘Bauble on a Chain’ is not so much a ‘fuck you’ as a ‘fuck me for falling for it’. For real people grief can make you difficult, morose, hard to be around. God forbid, ‘negative’.  But when you can turn it into a kind of art it also makes you attractive to people who want to seem deep and understanding. Chadwick sees through this – on that song her lover reveals themselves as wanting something a lot prettier than anything she’s got to offer;  ‘you want a prop with only lines / that ask your favourite things to eat / and then enquire about your day’. And she’s realising how this all sounds even as she’s singing it ‘when I describe it / this has no semblance to love after all’. That familiar feeling coming to the end of a relationship or friendship and wondering what the hell that was.

All her world-weary knowingness is stripped away in the heartbreaking ballad ‘Five Months’ with its almost childlike rhymes ‘five months without you is too long / so come back when you hear this song’. This is one of the few songs on the album where it doesn’t seem like Chadwick is commenting on her own feelings while she’s singing about them. Every now and then she’s slip in some reference to second-guessing if she should be making these big statements, like in opening track ‘Flow Over Me’s’ lines; ‘some of us can take it / some of us don’t make it/ some of us are fakers only ever be heart breakers’ and ‘all tied up inside my mother / never really knew my father / this is boring to you’, but ‘Five Months’ she gives in to naked wishful thinking. It’s a delicate song, a dream world this close to falling apart.

I go back and forth over whether there’s something to take from this record. I don’t think there has to be, I think as a thing, as a document from a person who’s gone through more than any of us have or probably ever will, it’s beautiful and worthy and basically above analysis. But maybe there’s a hint in ‘Wind Wool’s slowly lilting piano ballad of fighting your own brain, giving up, memory and friendship. It’s one of the record’s shortest and simplest songs, and gives us the line ‘I’ll die/ you died/ we die’. But she also seems to rally something close to a knowing smile in ‘some people think skies should be blue all the time but me I love a storm.’ Maybe this is the sentiment that us great fetishists of sorrow identify, or desperately want to identify with, that feeling of getting a little thrill as the dark clouds gather, to love that cleansing destruction of a good hard rain.

Buy the record or forever live with that nagging feeling of regret.