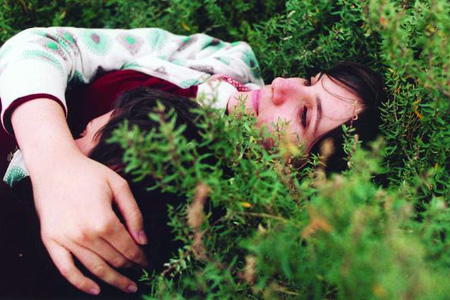 If that song title doesn’t make sense to you, don’t worry neither does it to me. Everytime I hear this it on the radio I think to myself how silly it was, spend 10 seconds trying to figure out what it means before giving up. But it keeps getting played and I have grown to like the melody of the chorus. It’s weirdly catchy.

Laura Jean has performed alongside M.Ward, Ben Lee, Augie March, Claire Bowditch, Jen Cloher and Sarah Blasko. Pretty much the cream of the crop of Australia’s singer songwriter scene. She released The Hunter’s Ode EP in 2003, and then won a recording grant from the Victorian government Arts Council which enabled her to get a chamber orchestra for her next recording, results of which you are listening to right now. The Swan Song LP was released in May this year on one of my favorite named label, Unstable Ape Records which has released Love of Diagrams, No Through Road and Snap! Crakk!

Laura retells her dreams. Maybe daydreams even. They rarely make sense and that’s ok. That’s what this song means to me now, her fantasy-like imagination brought to life through melody.