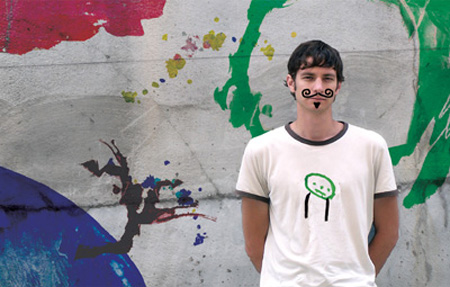 I think I have just seen the gig of the year. Big call I know, seeing that there’s a good month left to the year but this is as strong a candidate as any. I went to see Gotye at the sold out Prince of Wales Hotel, Melbourne, in not only his first headlining gig but his first gig with this band, ever. As previously written, Gotye is a genius producer from the beachside community of Mentone, Victoria who has put out a very strong contender for album of the year, his second solo effort Like Drawing Blood.

So how did he hold up with so much expectations? Gotye began walking out to the stage, with drums set front center stage, next to his keyboard/apple computer set up. Opening the proceedings by himself on drums backed on sequenced beats for ‘The Only Way’, Gotye battled through front-of-house vocal problems and emphasised the song with his skillful drumming instead. Just by instrumentation alone, he reminds me of a Phil Collins-esque wonderment of being able to sing and drum effortlessly at the same time. Two projection screens winged the stage, showing a montage of Aishwara Rai Bollywood films mixed non-descript segments of 70s track and field movies. I know that hardly makes sense but it all comes together when you see it.

By the third song Gotye has summoned his string quartet and launched into the call center revenge song of ‘Thanks For Your Time’. and from then went into the ballad of ‘Hearts A Mess’. Note by this time the crowd, consisting of Triple J fans and occasional gig goers alike have all decided to sing along to his lyrics, to the point where he couldn’t hear his own monitoring vox, leaving him with a wide grin for the rest of the night. It was amazing to see how an audience consisting of late 20s/early 30s Adult Contemporary music loving public has warmed and connected with the most DIY and underground artists in the country.

For a first gig Gotye has picked a perfect set list of 8-9 songs full of his crowd pleasers, including a few numbers from his first album. The closer was a ‘learnalilgivinanlovin’ a very Basics 60s stylised tune that shows the real strength in his voice. Admitting that this was probably his biggest song, everyone came out on stage, including members of The Basics, the quartet, and the two backup singers. This was really the climax of the show. And then it was over, with Gotye announcing that The Basics will be on in 15 minutes.

That’s right, The Basics came on after Gotye, at the premium timeslot of 12pm. This is just another way how Wally de Backer shows how loyal and thankful he is to the band that he’s played with for years, and allowed him to hone his stage performance skills. I’ve heard stories how different music managers and booking tried to sign him only to be met with the condition that whoever works with him must also sign The Basics. To get Gotye for a gig, you must get The Basics on the bill, just like how tonight was, just like how Homebake will be next week.

How did The Basics hold up to Gotye’s incredible set? Brilliantly. There’s two ways of looking at this: they are either the best suited up 60s boy band in the country, or they’re the best cover band of party tunes around. And I mean that in the best possible way. The Basics have played numerous gigs over the years but they have not been taken seriously until Gotye hit it big with his latest album. The band had a flying start with hits like ‘Rattle My Chain’ and ‘Just Hold On’ and then held the crowd’s atttention with a mix of covers, reworks and originals. However the real highlight of the band was in the encore, where they played killer back to back covers of The Police’s ‘Roxanne’ and Cream’s ‘Sunshine Of Your Love’. Gotye’s vocals on ‘Roxanne’ is just dead on unbelievable.

Gig of the year? Judge for yourself, catch both The Basics and Gotye Saturday 2 December at Homebake, Sydney.

Previous posts: Gotye, The Basics, Gotye: ‘Out Here In The Cold’ Clip, Gotye vs Faux Pas

Leave a Reply to Sean