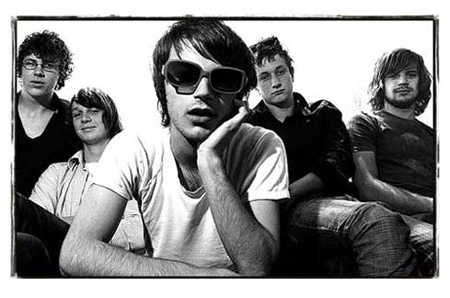 The Checks – ‘Take Me There’

Their songs sound like any old retro rock band to me, kinda a bit of Jet, a bit of The Exploders, or any of those retro rock revivalist bands from the 80s, 90s or today. They are around 19-20 years old, been together as a band since they were 15 and originate from New Zealand. As the story goes, The Checks were playing a gig when they were ‘discovered’ by NME’s Editor who happen to be on holiday at the time in Auckland. He offered them a spot in the NME new music tour, and so they relocated to London, scored a record deal and recorded and released their debut album Hunting Whales. Next Noel Gallagher himself chose them to be the support for an Oasis tour in Australia. And then the chance to came up to support The Hives in Japan. Quite the rock n roll story so far. They’re touring Australia in late May playing small venues like Hopetoun and The Tote before going on the road for the Jet tour support. Catch them if you dig this song.