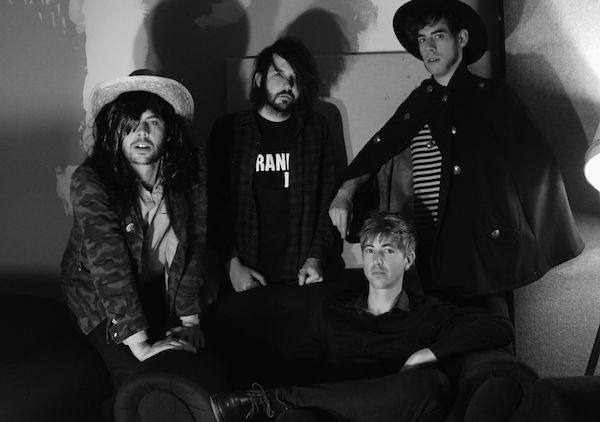 You can sense the muscle on some songs. It’s easy to visualise tendons gripping bone, the fibres stretching and tearing as the tune gives itself a good working out over and over again as you whack it on repeat. They just get beefier over time, the technique behind the brawn revealing itself; this one ain’t just a dumb banger, it’s got brains up top too.

Melbourne-based Witch Hats’ ‘Deliverence’ feels this way: a simple snare crack to start proceedings and then then the bass is there, swinging like a pendulum covered in treacle it’s so goddamn thick, trudging across the no man’s land the song sets us in, while guitar leads warble and flutter their way behind frontman Kristofer Buscombe’s sneering rasp of a vocal delivery.

“And I would lose it all/to watch your body fall/to see ya pissed down the drain”. Hate runs all the way through ‘Deliverence’. Not a misunderstood, hot-blooded hate, though; hate with purpose, with vision, like the hate of hell, Buscombe proclaiming “Hallelujah” before each chorus.

It’s been a fair few years since their last one, Pleasure Syndrome. In that time Witch Hats have stripped away the velvet curtains and lamplight that populated videos for songs like ‘Hear Martin’ and replaced it with the post-punk simplicity of black silhouettes and fire. The mechanical bounce of the band against the projections of destruction that makes up the majority of the video for  ‘Deliverence’ is hypnotic, like being presented with the inner workings of a well-oiled machine. It’s worlds beyond the slightly self-regarding nature of their older work.

Witch Hats have stripped away most all the finery and shine; and that don’t matter anyway, they still got teeth.

Witch Hats’ album Deliverence is out 1 July and available to preorder on vinyl and digital.