I’ve been away for a month overseas and I was fortunate enough to attend the College Music Journal Music Marathon buzzfest in mid October in New York. It was a new and exhausting experience for me. Calling it a marathon is fitting because unlike the bunched up South By Southwest, the CMJ showcases was spread over the a large number of venues in Manhattan and Brooklyn, so to catch all thosed buzzed up bands everyone had to see, I got to know the subway system real well. I spent most of my time in the lower east side of NY where the fashionable showcases of Fader, Vice magazines were, as well as hipster venues such as The Annex, Pianos, Arlene’s Grocery, Mercury Lounge and Bowery Ballroom. The CMJ pass allowed me to walk in and out of most showcases unless they were sold out. In hindsight I don’t think it was worth the price tag because even with my ambitious schedule it would have been cheaper just to pre buy each individual showcase’s tickets. If you were to go I recommend scoring some sort of press pass or just plan ahead and buy tickets and get onto guestlists and rsvp lists because most of the cool bands are playing small shows anyway.

I saw about sixty bands through out the week, everyday the showcases start at 11am and go on all the way to 1am, and this goes on for 5 days. Two more days of sideshows and extra shows makes it a full week of exhausting gig chasing. Of course most of the bands I caught are out of the scope of this blog, but just a quick mention the three best bands I saw were Holy Fuck, Vampire Weekend and Foals. I recommend you check out those bands further.

The Australian contigent for this CMJ was quite weak in numbers and buzz, less than 15 bands (maybe even less than 10) made an appearance. Three standouts out of this lot are:

Yes, the Ice Cream man himself is making in roads to the US clubbing conciousness via the Modular brand. I spent my birthday with Chris Muscles and Sydney’s DJ Sista Brockman drinking the band riders dry at the Modular party in Studio B, Brooklyn. We were also celebrating ‘Ice Cream’ being added to the Nova radio network in Australia so it was all good times for everyone. The crowd weren’t very familiar with Muscles’ songs, and I have to stay Modular parties in New York (and London) were a lot less Modular-like (read: fluro) than the Australian versions. Still everyone had a great night all around, other bands also on that night were New Young Pony Club and The Cool Kids. 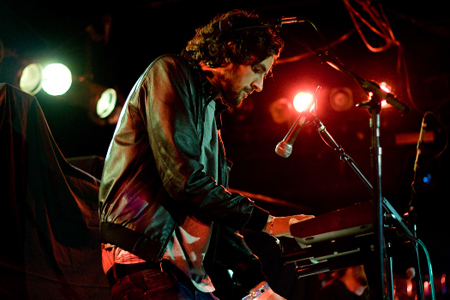 Midnight Juggernauts – ‘So Many Frequencies’

Unlike Natasha I think these guys are pretty good live. I’ve seen them over 10 times so I do admit a bit of sentimentalism when reviewing their shows, but no doubt everyone has lots of fun when these guys go off. I caught them at the last show of their Justice support dates in New York, playing a two night stand to a packed Terminal 5 of 3200 people each night. The venue was so new they haven’t sorted all the plumbing out and it broke over the mixing desk, pouring over $300,000 equipment while the Juggies sound guy Matt struggled in vain to dry it with his shirt. The pouring turned to flooding as the show went on, and eventually they had to abandon the set unfinished. It was quite a sight seeing security personel erect a makeshift tent indoors to the ward off the rain. Nevertheless everyone had a great time and the boys took me out on their end of tour partying across a few bars and then into Susie’s their publicist apartment which was a beautiful converted church building. Highlight of the party goes to the exclusive French bistro Beatrice Inn we were n when the DJ dropped ‘Smells Like Teen Spirit’ and the Justice and Juggies proceeded to a slam dance pile up, knocking down all the tables and the drinks in the tiny West Village joint.

Cut Off Your Hands 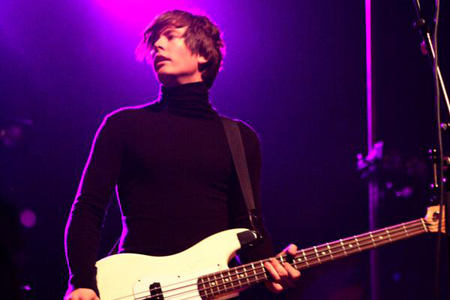 Cut Off Your Hands – ‘Still Fond’

No doubt the one of the highlight bands of the whole CMJ festival, the Kiwi boys have done really well everywhere they’ve gone in the world. Well deserved break for the boys who haven’t stopped touring since we first blog them here. They are one of the few bands that generated real buzz in the marathon and with a strong live show that wins over any cynic blogger type, and they did this aplenty in New York. This is how hardworking they were, they did seven shows in 3 days, four of them in one days two hours apart. And if you would just google them it’s clear that this strategy worked for them as the media love keeps on coming. They even got written on the New York Times for doing a record number of showcases in one CMJ week. Well done boys!