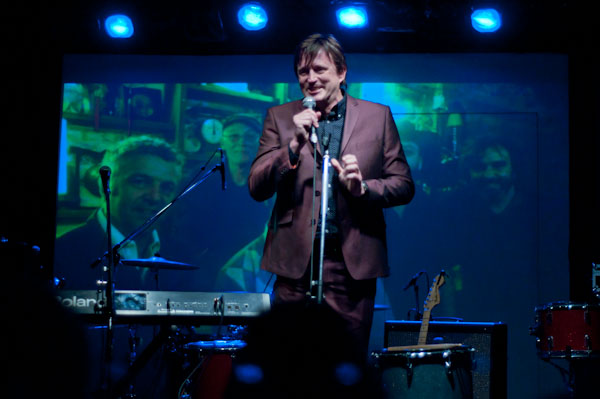 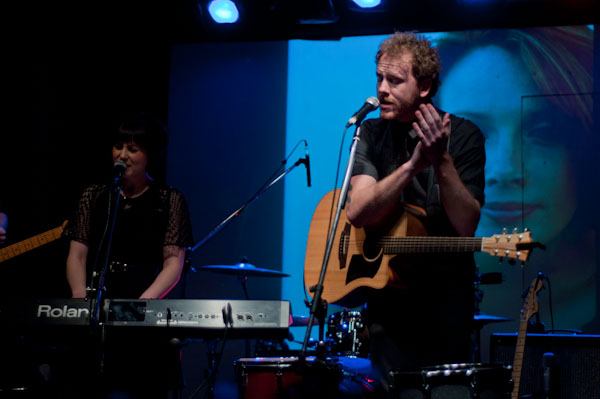 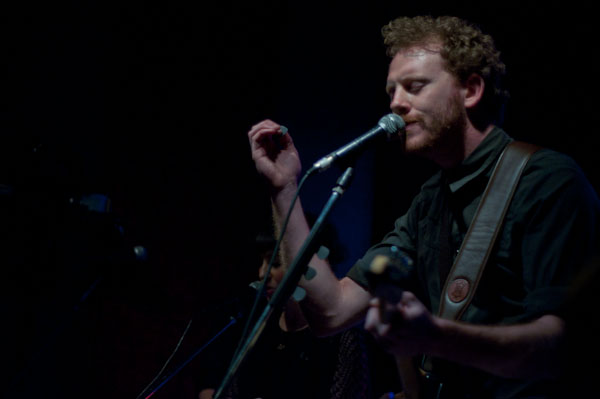 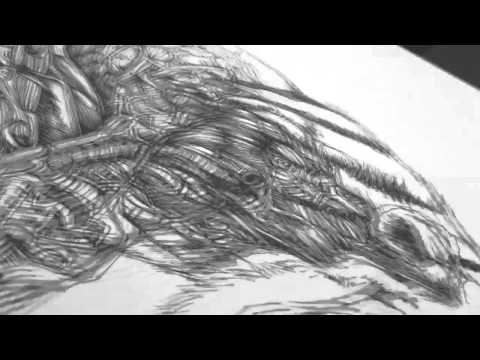 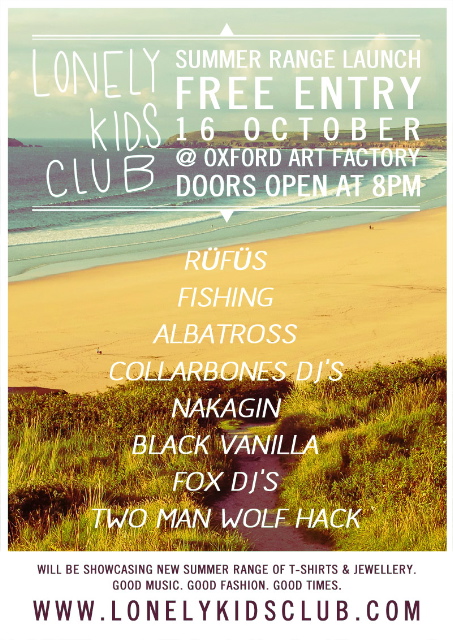 Do you like to have fun? Do you like to dance and Roll in good times? Drink merrily with your stylish friends while bathing in some of Australia’s finest music at one of Sydney’s greatest venues?

The answer is probably yes, ‘coz you’re here. The Lonely Kids Club are doing us all a favour and putting on a show at the Oxford Art Factory, featuring Rufus, Collarbones, Fishing and Albatross (alongside many others), launching their summer lineup.

October 16 is the date, Oxford Art is the place. I’ll be there, and I’m a charmer, so you should be there too. While you’re waiting, listen to/watch this stunning clip from Rüfüs. I’m in love.

You should check out Lonely Kids Club as well – their clothes are pretty and their attitude balling. 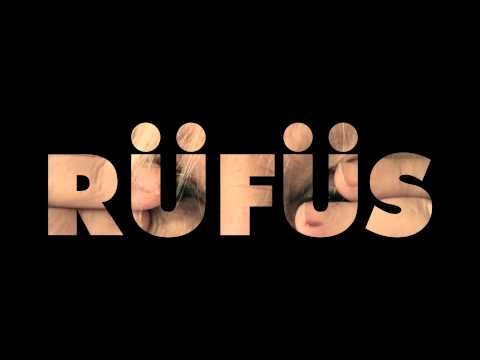 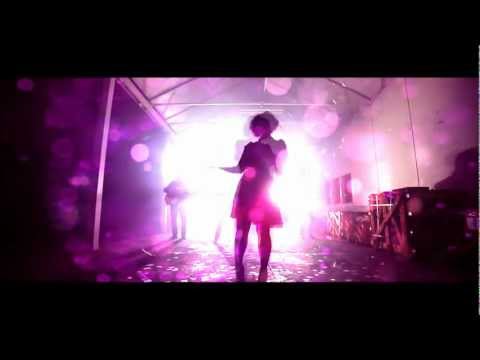 Earlier in the year, in the depths of winter, Dead Letter Chorus dropped one mighty-fine, super-summery clip on our doorsteps, accompanied by one darling of a film clip. Now, as we’re launching back into the warmer months, we’ve got a wistful-wintery tale, accompanied by a suitably darker clip. The track is All Mine and it’s the perfect follow up to Yellow House, as well as a rolling, harmonious, heart-wrenching ballad that deserves more adjectives than I could ever think of.

Both tracks are off Yearlings, Dead Letter Chorus’ recently released third album. Usually I avoid reviewing albums but this one deserves an extended mention. The album has a lot of guts, rolling deep in quality tracks and feels truly complete – every song owns its place.

It’s easy to harp on about the death of Australian folk music (and who can blame those who do?) but listening to the musical and lyrical scope of Yearlings, I’m less inclined to beat my head against the nearest hard, wall-like object. You can pick it up now, so you should. Personal favorite is I Belong With You, but honestly – it’s all fantastic

As an added bonus, they’re on tour right now – FBi Social this Saturday in Sydney and next Thursday at The Old Museum alongside favorites of mine Founds. More details, tickets and information for all y’all that like that kinda stuff is available here..

So many happy tones wiggling their way brain-wise from this tune ‘I Believe In Love, Kid‘. Oh Ye Denver Birds made the song, Allyson Alapont made a clip and it was pleasant and exciting for everyone involved (I assume). Electronically affected indie is all over the place and largely gross, foul and uninspiring – not so of Oh Ye Denver Birds. To quote, this shit is bananas – and bananas are good. Plus the clip is a smiley, pleasant walk through indie-fun-times.

Oh Ye Denver Birds are radcore, and have a funtastic (albiet small) back-catalogue. They’re supporting Megastick Fanfare all over the country right now until the end of October, so you’ll get your chance to feast on these fowl. Thank me later. 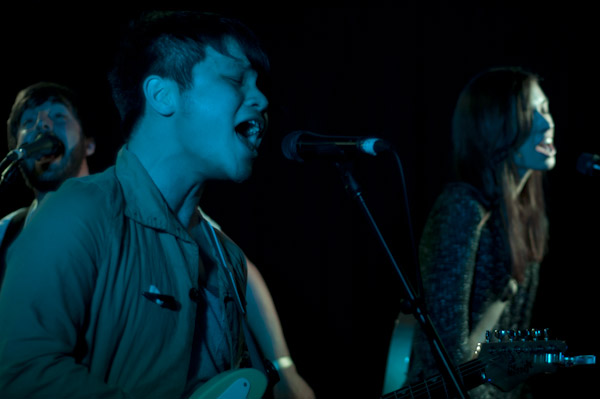 We’re talking darling indie-pop here – darling as in your first girlfriend, holding-hands-on-a-summer-day-but-never-kissing sweetness with a dash of hipster charm and a surprisingly mature style & implementation. They’re called Polar Knights, they’re punny & witty and also delightfully virginal for all their top-shelf presentation. Looking forward to their EP whilst tapping to this free-as-balls track, Burst at the Seams.

Their set wasn’t perfect, but it was honest and heartfelt, with real moments of (seemingly) emotional purity. One particular standout was City Fail, an ode to the spectacular failings of Sydney’s rail system – something I think we can all identify with. The venue itself was awesome – many thanks go out to the Verge Festival. I love a sneaky gazebo. 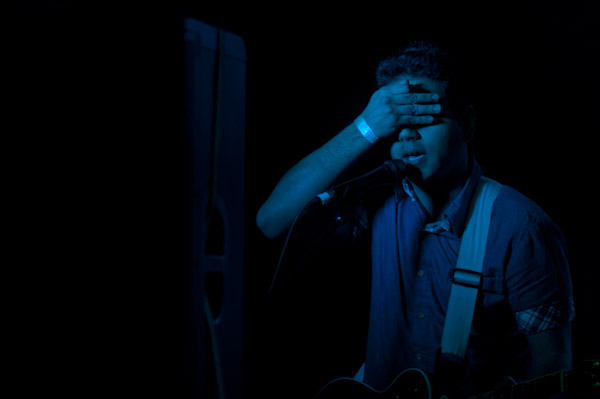 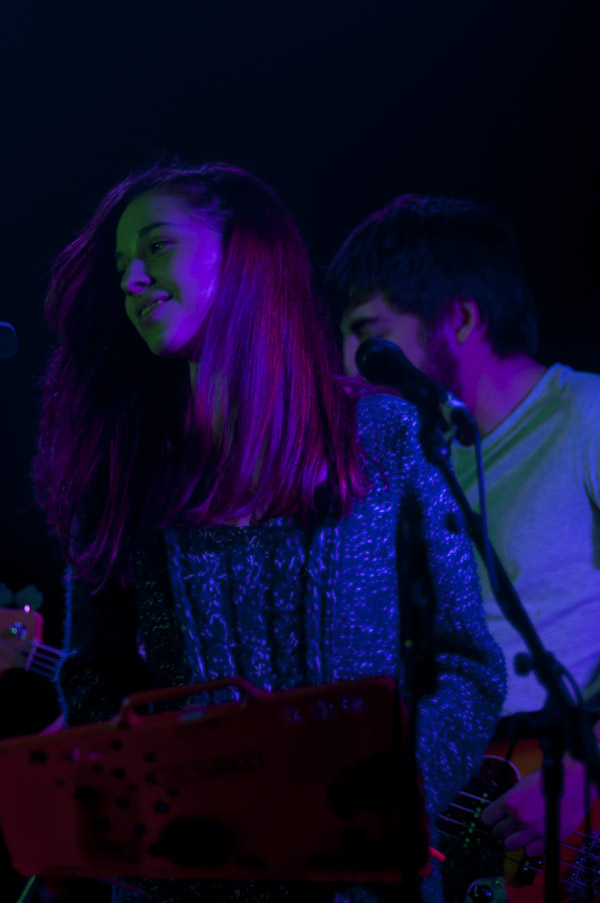 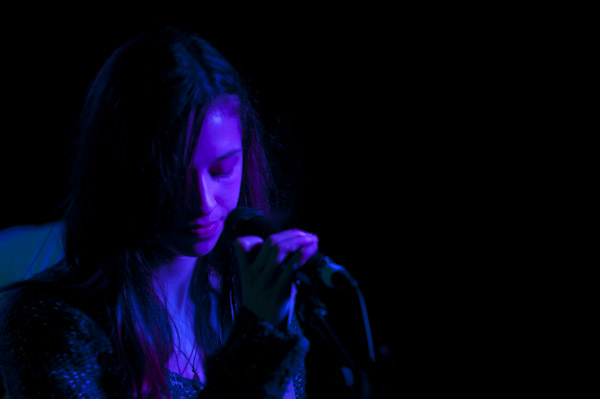 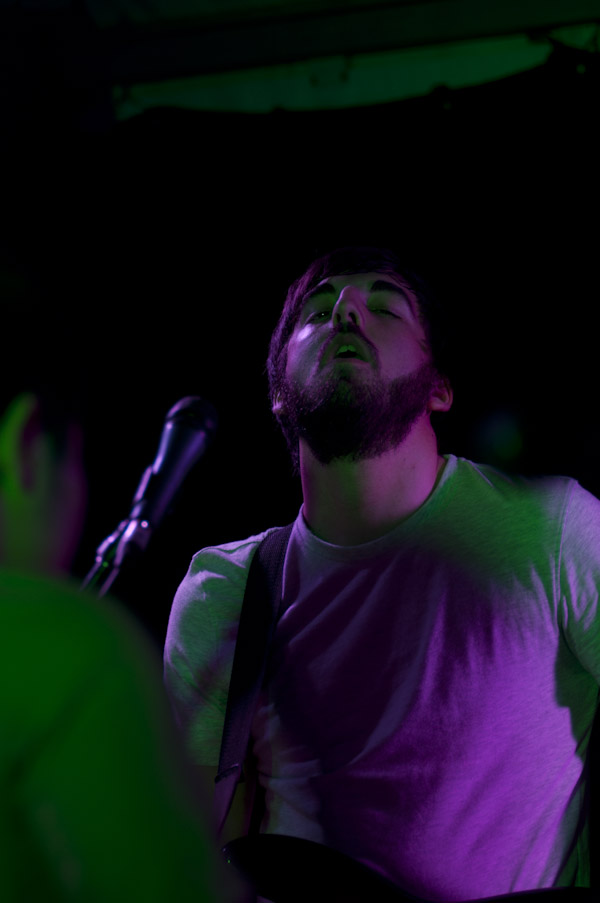 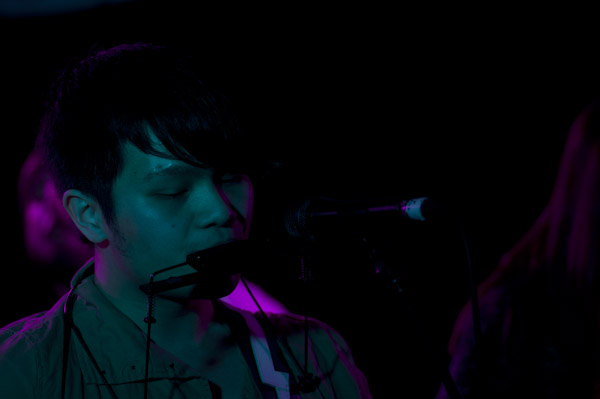 More photos after the break

END_OF_DOCUMENT_TOKEN_TO_BE_REPLACED

Let’s get one thing straight – post rock isn’t elevator music. Sure, some of it’s a little winding & pretentious and there are usually far too many words in post-rock band names (as well as grammatical confusion), but as a style it’s enthralling, interesting and often confronting – when done well.

Thankfully for the Australian post-rock scene, sleepmakeswaves do it well (and in less than 140 characters). (hello) cloud mountain is off their new album, and comes pre-packaged in a beautiful film clip, laden with tidy visual metaphors. It was directed/filmed/edited by Frederick Lloyd, a 20 year old Brit doing amazing things with a camera.  The track itself manages to pull off the epic feel of post-rock without the epic lengths – at just over three minutes, it’s a long step from some other opus’. If I was going to dive into clichés, I’d use words like “sweeping sound-scapes”, “delicate” and “multi-instrumental aural experience, filled with dreams of home and lost love” – but since it’s Tuesday, I’m not going to do that. Instead you get one of the best pieces of post-rock that I’ve ever heard come out of Australia.

If you haven’t listened to much (or any) post-rock, sleepmakeswaves are a great starting point. If you listen to a lot, their new album …and so we destroyed everything is available right now on bandcamp, and well worth the $12-something.

Check out their FB for more details on their (very fast approaching) shows. I know I’ll be there.

Oh and also, if you haven’t already – make the video huge, crank your speakers, and chill. It’s worth it.